The House Of Magic 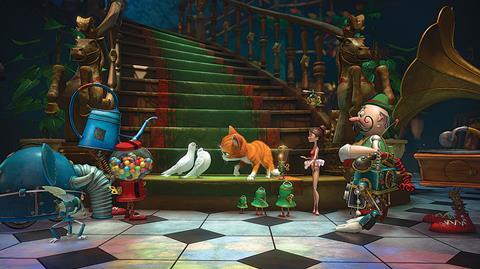 It may lack the pizzazz and polish of Pixar but The House Of Magic is still breezy, undemanding CGI fare that should readily appeal to its target audience of younger children. The simple plot and basic characterisations may underwhelm but the energetic 3-D animation is constantly impressive as it works hard to create a sense  of the action reaching out of the screen to grab the viewer’s attention.

There is a freewheeling exhilaration in the way co-directors Stassen and Jeremie Degruson embrace the technology that becomes  irresistible and sustains interest as the predictable story starts to drag and grow repetitive.

Released in some European and Asian markets last Christmas, The House Of Magic has a UK premiere at Edinburgh prior to a UK theatrical release in the prime school holiday territory of July.

Expanded from Ben Stassen’s 2004 short Haunted House, The House Of Magic follows an abandoned kitten who takes sanctuary in the spooky mansion of elderly magician Lawrence (Eugene Levy). The house is crammed with gizmos, gadgets, antique props and a collection of toys not dissimilar to the cast of the Toy Story trilogy.

The collection includes a light bulb called Edison and a dancing doll named Clara. Lawrence names the kitten Thunder (Murray Blue) and welcomes him to the household. He is a less welcome presence to Jack  (George Babbitt) the rabbit and Maggie (Shanelle Gray) the mouse who fear that Thunder will steal their place in Lawrence’s affections.

As Thunder tries to survive the various attempts to leave him out in the cold, Lawrence is hospitalised allowing his mercenary nephew Daniel (Grant George) the perfect opportunity to sell the house and dispatch the confused Lawrence to a retirement home.

The central character of an elderly magician gives The House Of Magic a slight affinity with Sylvain Chomet’s The Illusionist but the similarity ends there. Chomet’s fondness for melancholy figures and his painterly eye are in stark contrast to a film that is more interested in easy laughs, bright colours and a hectic, helter skelter narrative in which the pace rarely flags.

The 3-D animation is what carries The House Of Magic. The camera glides and swoops as Thunder slides down a banister, birds fly through the air and all kinds of objects are lobbed towards the viewer including pancakes, donuts and gobstoppers.

There is a freewheeling exhilaration in the way co-directors Stassen and Jeremie Degruson embrace the technology that becomes  irresistible and sustains interest as the predictable story starts to drag and grow repetitive. A soundtrack of vintage hits from the likes of Madness and Shakin’ Stevens adds to the high spirits and should bring a smile of recognition to an adult audience.