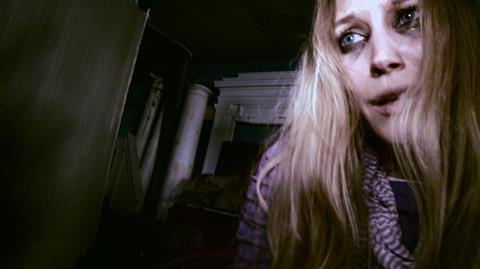 Irish psychological horror film The Inside treads familiar territory with its use of supposed found video footage as a way into a terrible tale of murder and monsters, though its strong use of sound effects and a game series of performances bely its low-budget origins. Likely to be a regular at genre fests, its lack of known names and real gore may hamper formal release, though home entertainment may be a viable outlet.

The violence is quite nasty, with the hand-held camerawork making it even more intense.

Directed and scripted by Eoin Macken – better known for playing Sir Gwaine in the BBC TV series Merlin – the film revels in its delve into a darker, bleak and more disturbing underbelly of Dublin, and while its structure is familiar (hand held camera and largely first person perspective) its visceral and violent moments give it a impressively disturbing edge.

The Inside has is world premiere at London’s weekend-long FrightFest event.

The film opens with gloomy footage of nightime Dublin and a female radio DJ talking about three girls who recently went missing in the city centre. An unnamed man – played uncredited by the director Macken – pawns an item, and comes away with some cash and a video camera.

He sits and starts watching old footage on the camera. It is of a group of girls planning to celebtate the 21st birthday of Corina (Siobhan Cullen) and plan to record everything on film…”till we run out of tape or get hammered,” as one comments (rather apocryphally).

They are nastily interrupted by the arrival of three abuse and violent men who plan to attack and rape the women…but when drugs kick in and the lights start to go out, it turns out there is something else rather nasty lurking in the building. Bodies start to fall as the girls try and escape via the brick basements, but they find themselves followed and stalked by a shambling, gore-covered, naked figure (in credits listed as ‘creature’ played by Patrick Moynan).

After finishing watching the video, the man rather foolishly decides to track down the warehouse, and makes his way into the basement torch in hand where bodies and a beastie lie waiting for him.

The violence is quite nasty, with the hand-held camerawork making it even more intense, and while there is the usual violence against women it is never exploitative. As the lights go out and the violence – and threat of violence – increases, the film maintains a tight grip on proceedings, and despite the story being weighed down by the familiar filmic sight of screaming terrified young women fumbling it pitch-black basements to escape the horrors, there are some nicely staged moments.