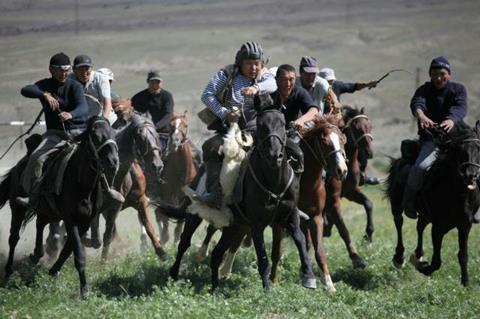 Here comes another portrait of capitalism in its most brutish form, trampling all over the Developing World. Disguised for a while as a gently poetical folktale, Arym Kubat’s third feature gradually turns on the screws, leading into a final grim note that leaves no doubt about its intentions. With five European funds contributing to the production and with a burning subject such as energy control high on the world’s priority list, this is a surefire festival item, with definite chances for niche art house distribution.

This is a surefire festival item, with definite chances for niche art house distribution.

A typical folk hero, Svet-Ake (impishly played by director Kubat) steals from the rich - in this case the state - for the benefit of the poor. No major heist, to be sure. An electrician (the name, translated into English, means “Mr. Light”), he fixes anything broken: short circuits, power failures, and if need be, marriages. For him, respecting the law is a recommendation rather than an obligation, if by turning back the electricity meter of an old pensioner he can help the old man survive on his meager budget, he will not hesitate to do so.

There are only two things that could improve his existence. The father of four daughters, he dreams of having a son. In the midst of a drunken bout he even invites a vigorous neighbor into his marital bed, hoping to plant the seed of a son. Simultaneously, in his own rudimentary fashion, he has been developing an Aeolian generator and dreams to place it somewhere in the valley nearby, where strong winds will produce energy for the entire village.

Since the Kyrgyz sources of energy are mostly found across the border in Uzbekistan (a questionable decision following the partition of the Soviet empire), Kubat’s picture takes on added political significance. But its main strength lies less in politics and more in the relaxed simplicity of its procedure, its humorous touches and the natural demeanor of the villagers, and particularly the children. Opening with two teams of riders competing against each other in a game using a dead sheep for a ball, the film ends with an almost identical scene, in which Svet-Ake takes the place of the dead sheep. But the last shot, a light bulb turned on by the electricity of Svet-Ake’s makeshift generator, suggests not all hope is lost.

The Light Thief (Svet-Ake) screened in the Piazza Grande section at the Locarno International Film Festival.