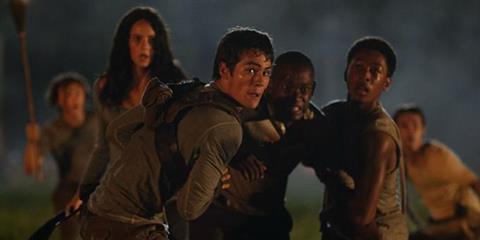 Hollywood’s latest potential young adult franchise gets off to a solid start with The Maze Runner, a dystopian sci-fi thriller whose fast pace and appealing cast just about make up for a lack of really engaging drama. YA franchises have been hard to get off the ground since Twilight and The Hunger Games, but if fans of James Dashner’s 2009 source novel come out in sufficient numbers this initial outing might lead to screen versions of the rest of Dashner’s Maze Runner trilogy.

First time feature director Wes Ball manages to spin out the intrigue – the creators of the Glade, and their purpose, are only revealed late in the action – and he provides the film with a fairly exciting climax.

The 20th Century Fox production arrives in the US and many international markets over the weekend of September 19 after a build up that included a presentation to core genre fans at July’s all-important Comic-Con convention. The UK opening in October should benefit from the film’s Brit-heavy supporting cast.

In a set-up that recalls everything from Lord of the Flies to The Twilight Zone to Lost, the action begins in the Glade, a grassy expanse surrounded by huge walls that is home to a colony of young men with no idea why they are there. Every day the walls open and the colony dispatches hand-picked Runners to search for a way out of the vast maze behind the walls while dodging biomechanical monsters called Grievers

Hunky star Dylan O’Brien (from MTV’s Teen Wolf and The Internship) plays Thomas, a new arrival to the Glade who shakes things up with his determination to escape confinement. The subsequent arrival of the colony’s first female inhabitant (played by the UK’s Kaya Scodelario, from TV series Skins) precipitates a crisis that ends in a daring escape plan.

The story doesn’t provide much scope for relationships or conflicts between characters, though Thomas does clash a few times with Glade tough guy Gally (Will Poulter, another Brit, from We’re The Millers). And the setting limits the film’s visual possibilities.

But first time feature director Wes Ball manages to spin out the intrigue – the creators of the Glade, and their purpose, are only revealed late in the action – and he provides the film with a fairly exciting climax as Thomas and co battle their way out of the Maze. A coda to the main action opens the door for the young characters to face another challenge in a sequel, if the first film’s box office performance allows.