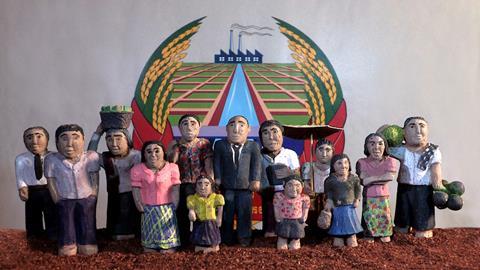 The correct title of this film should have been The Missing Pictures for there is more than one picture missing here to lend it the impact it deserves. These painful, horrific recollections of Paris -based Cambodian director Rithy Panh, who has written extensively and made quite a few films (such as Duch, Master of the Forges of Hell) about the genocide of his people at the hands of the so-called revolutionary Khmer Rouge regime, are no doubt shattering and will be most likely greeted with all the respect they deserve, but the dearth of actual footage to support it is sorely visible all through.

Panh’s story is certainly heartbreaking, though not all the rhetorical flourishes of the text written by Christophe Bataille and delivered in a melancholy tone of voice by Randal Douc, are really necessary.

As Panh himself points out in The Missing Picture (L’image manquante) no real images have remained from that period to show the full  extent of the mass murders instigated by Pol Pot in Cambodia over the four years it was ruled by the communist-inspired Khmer Rouge. In the process of attempting to turn the country into a fully self-sufficient nation by simply depriving its people of food and medicine, sending them to obligatory work camps, exterminating anyone who tried to stand, be it even timidly, on their way, not to mention the purges of all the suspected subversives within their own ranks.

More than  two million people found their death during that period of time, with intellectuals, middle class, the old, the feeble and the sick being victims or predilection.

Though the Khmer did take pictures, and lots of them, to identify all their victims, they were all taken before torturing to wring confessions out of them, and once obtained, kill them. There are, it seems, no visual testimonies remaining, a major problem for any documentary trying to cover to present the full horror of this period. Panh’s solution, after searching all over the archives and through all the old papers without any joy, was to create a whole population of miniature wooden puppets representing mostly but not only the victims, but often their persecutors as well.

With the help of these puppets that take over every time the meager available footage proves insufficient, he tries to tell his own story, similar to so many others, from the moment his family was deported first to the country side, then to work camps, losing, one after the other, his parents, brothers and sisters, watching, terrified, as people all around him, old and young, man and women, were drowning in the mud, beaten to death, forced to admit they had stolen a handful of corn and being executed for it, all in the name of lofty imported ideals.

While every single restriction inflicted on the population was presented as the inevitable result of shortage that through harder work will be overcome, the Khmer, as Panh points out repeatedly, never suffered from hunger, cold or any other deprivation.

Panh’s story is certainly heartbreaking, though not all the rhetorical flourishes of the text written by Christophe Bataille and delivered in a melancholy tone of voice by Randal Douc, are really necessary. On the other hand, they are certainly much more powerful than any image displayed on the screen.