The Piano In A Factory 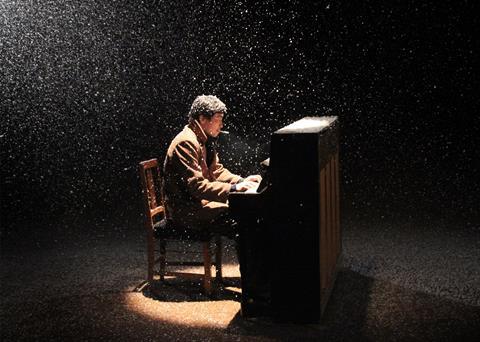 Despite its rather lumbering title, The Piano In A Factory is a delightful Chinese film that artfully blends music, romance, comedy and just a little social comment, but all shot in an engagingly breezy manner that marks out writer/director Zhang Meng as a talent to watch.

The Piano In A Factory is a beautifully made little film that may be too whimsical for its own good at times, but is still a thoroughly enjoyable movie experience.

It has the look and style to appeal to art-house distributors as well as film festivals, with its blend of musical – and even dance – routines acting as a nice contrast to its bleak backdrop of an industrial town where workers are losing their jobs. The film screened in competition at the Tokyo International Film Festival, and also screened at the Toronto Film Festival.

The film opens in artful style as a small band led by accordion player Chen (Wang Qian-yuan) play mournful Russian music, before being told the tune is far too slow and they should play something a bit pacier.

Laid-off steelworker Chen looks after his young daughter and struggles to raise the money to pay for her piano lessons. She is deemed a young star, though from her on-screen playing one wouldn’t guess it. Out of the blue his estranged wife turns up, demands a divorce and wants custody of their daughter…the rather self-obsessed little girl wants to go to whichever parent can provide a piano.

After- rather ineptly - trying to steal a piano from a local school and failing to raise money from his friends, Chen eventually recruits a band of oddball buddies and they set about using the facilities of their run-down old factory to make a heavyweight metal piano.

Along the journey we are treated to comical chase routines (rather in an engagingly old-fashioned silent movie style) and a stuttering romance between Chen and his on-off girlfriend (an engagingly grumpy but warm-hearted performance by Qin Hai-lu), as well as a Spanish-style bolero dance scene on the factory floor, before the completed piano is revealed and the little brat of a girl gets to tinkle the ivories.

The Piano In A Factory (I guess the title says it all really) is a beautifully made little film that may be too whimsical for its own good at times, but is still a thoroughly enjoyable movie experience.