The Possession Of Michael King 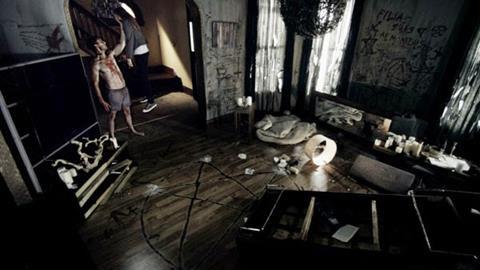 Demonic possession and found footage! Sound familiar? Well welcome to another horror release that combines the two, and while David Jung’s debut film ticks all of the right genre boxes and works well technically it suffers from simply lacking originality and being another in a rather long list of found footage chillers.

There are some nice touches from David Jung, who is clearly a talent to keep an eye on.

The Possession Of Michael King, which gets a brief US theatrical outing prior to it home entertainment release, is a smartly made horror though, driven by a suitably intense lead performance by Shane Johnson as a filmmaker who heads into the dark side.

Michael King (Johnson) had planned to make a warm and fuzzy film about his happy family life, but when his wife if killed in an accident he blames a tarot card reader (Dale Dickey, from Winter’s Bone) and decides to make a film his delve into the supernatural.

Sporting many small cameras, he gets demonologists and mediums to use his as a guinea pig, convinced they will fail, but – surprise, surprise – he gets possessed and becomes to danger to all around him, and especially his young daughter (Ella Anderson).

There are some nice touches from David Jung, who is clearly a talent to keep an eye on, it is simply both the territory and the format feels so familiar that it is hard to make even such a well made low budget film stand out.