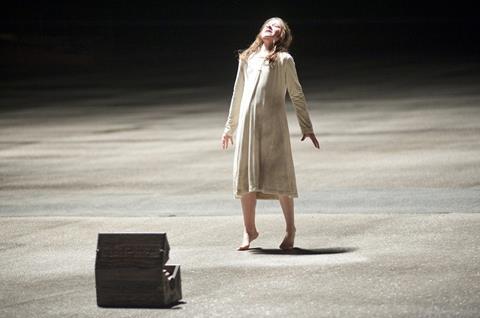 Moviegoers who prefer their horror creepy rather than gory may enjoy a good shudder with The Possession, a moderately elegant chiller about a young girl possessed by a nasty little demon. But while director Ole Bornedal deserves some credit for his restraint and tonal control, there’s only so much he can do for this latest twist on the mouldy exorcism drama.

The Possession doesn’t have much new to add to a horror subgenre specialising in angelic little girls who start acting strangely and taking in weird voices due to demonic possession.

Lionsgate will release The Possession August 31, which kicks off the Labor Day weekend, a traditionally tepid box office frame. Without much star power or advance buzz, the film might attract some attention thanks to producer Sam Raimi’s name in the credits — not to mention that the film is rated PG-13 rather than R, which will widen its potential audience. But all signs point to a movie with a short theatrical life that might scare up more business on DVD.

As the film opens, Clyde (Jeffrey Dean Morgan) and Stephanie (Kyra Sedgwick) are a divorced couple trying to be good parents to their two daughters. However, when the younger sibling, 10-year-old Em (Natasha Calis), becomes interested in an ancient box she finds at a garage sale, she falls under the spell of an evil spirit trapped inside that wants to take possession of her.

Based on a 2004 Los Angeles Times article about a seemingly cursed wooden cabinet that brought its owners bad luck, The Possession doesn’t have much new to add to a horror subgenre specialising in angelic little girls who start acting strangely and taking in weird voices due to demonic possession. But Bornedal helps some by emphasizing a measured, stripped-down style that grounds the proceedings in realism, which amplifies the supernatural shocks when they come. Hinting at terror rather than showing much of it, Bornedal crafts a sense of encroaching dread as Em slowly becomes seduced by this mysterious box and begins her subtle transformation.

A mildly novel twist in The Possession is that the demon is a dibbuk, a frightening figure from Jewish folklore. As a result, unlike the typical exorcism film that requires Catholic priests to throw water and hold crucifixes to defeat the evil, Clyde must eventually seek the help of a Hasidic rabbi (rapper Matisyahu, exuding calm command) to cast out the demon. But substituting one religion for another fails to enliven a predictable third act involving the usual amounts of writhing bodies and holy chanting.

Morgan follows his director’s understated lead and delivers a grizzled, low-key performance as the concerned father. Sedgwick and Madison Davenport (as the older daughter) are largely on the sidelines, but Calis does good work utilizing her deep brown eyes to suggest an innocent young girl internally under siege by an invading presence. There’s not much of a character to play, but Calis makes for a sympathetic figure, her blanked-out looks while she’s being possessed an effective way to inspire some chills down the spine.