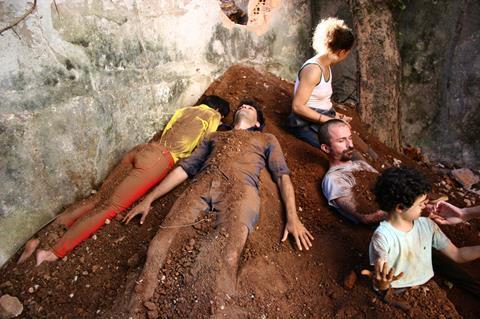 Plotless, anarchic and definitely overlong, The Residents (Os Residentes) looks like a throwback to the old Brazilian avant-garde films of the sixties, marching in its own tracks but never taking them quite seriously. A long series of sketches reject all the accepted narrative modes as outdated but at the same time, argues all rebellious activities are self-defeating as well for all they lead to is the destruction of one establishment only to be replaced by another.

Any early suspicion of earnest anti-establishment propaganda is gradually dispelled by the ironic slant and a touch of ridicule which becomes more evident as the procession of sketches marches on.

The press book will tell you this is all about a group of residents in a soon to be demolished house who declare war on a world which has led utopia and poetry astray. Trying to find in Tiago Mata Machado’s brightly colored puzzle any traces of this, is a pretty hopeless endeavour but this shouldn’t worry festivals looking for outrageous entries to beef up their programs or art houses specializing in experimental items. And that’s about all the territory it has a chance to cover.

What is actually on the screen - all through this picture - are a group of six adults and a child, engaged in all kinds of simulated rebellious activities, making statements, quoting slogans such as “esthetics are the ethics of the future” (Godard, anyone?), telling each other tales, kidnapping and tying up a blonde woman in the bathroom, suffering in general from modern life angst, arguing for an uprising against the merchant art, marching, chanting and displaying the irreverence to any film-making narrative that is essential for this type approach.

Any early suspicion of earnest anti-establishment propaganda is gradually dispelled by the ironic slant and a touch of ridicule which becomes more evident as the procession of sketches marches on. A long, supposedly anguished conversation between a couple in an unexplained crisis ends up with him cropping her pubic hair to fashion a moustache which she later sports on her face.

Following a fiery speech on revolutions needing funds just like any other social venture and another one arguing against order and peace, for disorder is the natural state of the world, there is finally a return to nature and then, the house that was kept out of sight until that point, is finally demolished, as promised by the press book, to make room for a new “something”.

Strikingly shot - a far cry from the old fuzzy avant-garde images – mostly in close-up, thus making the use of any sets superfluous, with a vivid palette of colors lighting up the screen, the jaundiced message of the picture suggests there is something wrong with art in general and movies, more particularly, at this point in time. No doubt there is, but sadly enough, Machado is preaching here to the converted, and they are not more than a handful of unhappy few.