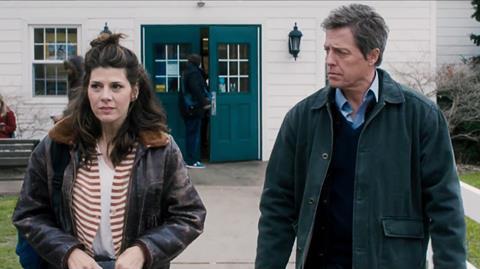 The fourth collaboration between Hugh Grant and writer/director Marc Lawrence is a bland, soft-centred romantic comedy that plays to the star’s long established screen image as a witty, self-deprecating, emotionally constipated charmer. The Rewrite offers some perky comic set pieces in the initial stages before gliding into increasingly sentimental territory as Lawrence tries to tie-up all the emotional loose ends.

A sheepish, uncomfortable-looking Hugh Grant still has great comic flair when it comes to awkward encounters and emotional reticence and Marisa Tomei supplies him with a bright, sunny counterfoil.

Grant’s relative inactivity in recent years may have made fans eager for his first rom-com in some time and the film’s commercial fate will depend on just how much he has been missed. Middling theatrical returns seem possible for a film most likely to appeal to an older demographic.

Screenwriter Keith Michaels (Grant) is still living in the afterglow of his Oscar-winning success Paradise Misplaced from fifteen years earlier. Lawrence cleverly uses Grant’s Golden Globes Four Weddings acceptance speech to conjure up that long ago triumph. Now, he is a middle-aged mess, divorced from his wife, estranged from his teenage son and desperately seeking to pay the mounting bills.

He reluctantly accepts an offer to teach at Binghamtown, a sleepy university city known as the birthplace of Twilight Zone guru Rod Serling and the carousel capital of the world. Within a few hours of his arrival, he has slept with student Karen (Bella Heathcote), offended haughty ethics professor Mary Weldon (Allison Janney) and generally proved himself entirely unsuitable for a teaching position.

His selection of students is determined more by physical attraction than writing potential, although he does take a shine to straight-talking mature student and single mother Holly (Marisa Tomei). “Are you trying to fill a spiritual vacuum with alcohol and young women?” she demands. ” Yes!” comes the honest reply.

The Keith and Holly relationship has an Educating Rita potential that is never fully explored or realised. Nothing in The Rewrite cuts very deeply as Lawrence settles for amiable, undemanding fare that gradually eases away from fish out of water farce in favour of schmaltzy redemption and rebirth.

A sheepish, uncomfortable-looking Hugh Grant still has great comic flair when it comes to awkward encounters and emotional reticence and Marisa Tomei supplies him with a bright, sunny counterfoil. They make a believable and likable couple but they need better material than The Rewrite provides.