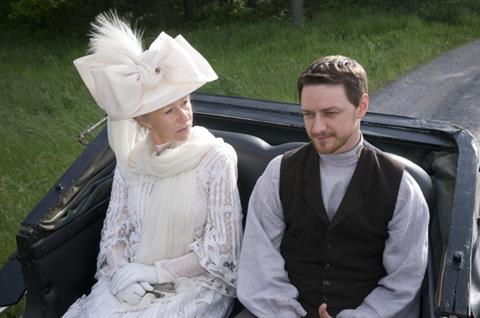 When they merged their companies in 2001 to create Egoli Tossell Film (ETF), Jens Meurer and Judy Tossell determined to be “European producers with a great passion for great stories and storytellers”. The films they went on to make — including Russian Ark, Black Book and Shooting Dogs — bear this out.

But in 2006, the Berlin-based duo decided to raise the stakes — and the budget levels. The first fruits of the strategy are coming out this year, with titles as diverse as the Hildegard Knef biopic Hilde, Michael Hoffman’s love story The Last Station, Christopher Smith’s medieval mystery Black Death and Olivier Assayas’ thriller Carlos The Jackal.

“We took a very clear decision that we were going to make bigger-budget films,” says Tossell. “Films in the budget range of $10.4m-$22.4m (£7m-£15m) are having a hard time getting financed in the US or elsewhere, but they are the size of film we can do here [in Germany].”

“The problem is that the British system has become so co-production unfriendly.”

Originally, the $13.4m (£9m) Black Death had been planned as a UK-Germany co-production, “but it quickly became apparent that a UK co-production might not even make sense,” Meurer recalls. “So we decided to focus on it being a purely German film, which is a little bizarre when you have a British director and mainly British actors in the cast.

“The problem is that the British system has become so ‘co-production unfriendly’ that even the British producers [Phil Robertson of Zephyr Films and Robert Bernstein of Ecosse Films] were relieved it isn’t a co-production.”

Black Death was shot at locations throughout Saxony-Anhalt and Brandenburg from April to June this year with Sean Bean, Carice van Houten and Eddie Redmayne heading the cast.

Meurer’s positive experiences of shooting The Last Station in Germany in spring 2008 meant practically all of the crew were recruited locally. “We pushed for as many people as we could get from Saxony-Anhalt, Thuringia and Leipzig,” he says. “One of the surprises for me is how many people speak good English. We had the second and third ADs from Halle, and language was just not an issue.”

With the UK such “a dead loss” as a potential co-production partner, Meurer says he is “driven more and more to look elsewhere for partners, especially to France and Russia”.

In fact, French production company Fidélité approached ETF to come on board Israeli director Eran Riklis’ next feature, Playoff, which is based on a true story about Israel’s national basketball team coach Ralph Klein accepting an offer to train the German team in the 1970s. The Germany-France-Israel co-production, recently awarded $1.5m (£1m) production support by Hessen­Invest, will be shot in and around Frankfurt early next year, with Wild Bunch handling international sales.

“It sounds like a cliché, but we’re looking for emotional, original stories.”

Next year will also see ETF launching its first international franchise with the adaptation of the first of three of Francois Lelord’s bestselling Hector’s Journeys novels. The Germany-France-South Africa co-production will be shot in English at locations around the world.

“It sounds like a cliché, but we’re looking for emotional, original stories, and also very European stories,” Tossell says. “We’re looking for films that touch us personally, that have something to say and something that a large audience is going to tap into. And on the practical side, projects which are do-able for us as a European producer based in Germany.”

At the same time, Meurer stresses that the company remains “a home for smaller projects”. He is currently working on a documentary with Tolstoy’s great-grandson, Maxime Mardoukhaev, and has a follow-up project with Ofra Tevet, co-director of Menachem And Fred, about the children of Nazi war criminals.

Meurer founded Egoli Films in 1993 and was named documentary film-maker of the year by the European Film Academy in 1995.

Tossell set up Tossell Pictures in 1996.

The two companies merged in 2001 as Egoli Tossell Film with subsidiaries in Cologne, Berlin, Munich and Leipzig.

ETF and the UK’s Zephyr Films established a joint company in Halle in 2008 to produce The Last Station and future projects shooting in Germany.

Meurer and Tossell have three children together.