The Tightrope: A Theatrical Adventure With Peter Brook 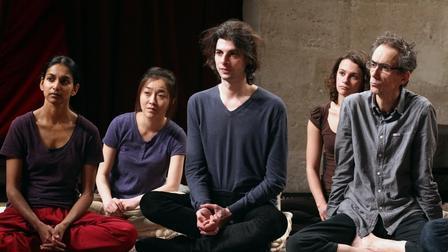 While sweeping statements are a risky proposition, its difficult to imagine any living actor who wouldn’t want to see Simon Brook’s compact and inspiring doc The Tightrope. Deploying seven hidden cameras as the director’s 87-year-old father Peter Brook works with a group of seasoned actors from varied cultural backgrounds, the film provides a precious glimpse of the senior Brook’s nifty, time-tested exercises for getting at the truth of theatrical perfomance, one hard-earned moment at a time.

With a keen eye for immersion and immediacy, Simon Brook and his editors have whittled down two weeks of rehearsals into a seamless, up-close-and-personal parcel that unspools like a breezy masterclass.

After its Venice premiere Out of Competition, this playful (literally!) venture is set for theatrical release in Italy and should enjoy a sprightly television career wherever the creative process is welcome.

The title refers to an exercise in which the actor walks an imaginary tightrope stretched from one end of the rehearsal space to the other. The challenge is to navigate the ever-so-narrow string with such conviction that the audience believes a flat stretch of carpet is an unforgiving highwire. Thanks to Peter Brook’s astute and playfully prodding evaluations, the exercise does wonders for focus, concentration and captivating physical schtick.

Englishman Brook has been based in France for over 4 decades. In addition to his innovative stagings for theater and opera, his film directing includes Lord Of The Flies, Marat/Sade, Meetings With Remarkable Men, The Mahabharata and 1968’s recently restored anti-Vietnam picture Tell Me Lies. The Tightrope, recorded over a span of two weeks in Paris, would already be touching and instructive if it were “only” a rare filmed record of a modern master at work. But there are moments here, captured for posterity, in which the title exercise leads to an absolutely convincing ah-ha! of emotion, despite the absence of scenery and costumes.

Brook’s hand-picked actors and several acoustic musicians are alert, agile, palpably creative (as are the five camera operators) and unafraid to fail. When everything clicks, it really feels as if You Are There, witnessing the powerful difference between adequate and astonishingly good performance.

With a keen eye for immersion and immediacy, Simon Brook and his editors have whittled down two weeks of rehearsals into a seamless, up-close-and-personal parcel that unspools like a breezy masterclass. (Everyone’s clothes were washed each night for continuity.)

Peter Brook, seated in a chair observing the troupe with what seems to be a permanent glint in his eyes, doesn’t speak all that much. But what he has to say - about the way the now-forgotten hourglass was once a physical reminder of the passing of time, of how insects and birds easily operate with a “shared mind” that humans find almost unattainable, how in all languages you “play” a role - is frequently wise and memorable. Colour grading by Lionel Kopp is top notch.