The Truth Shall Not Sink With Sewol 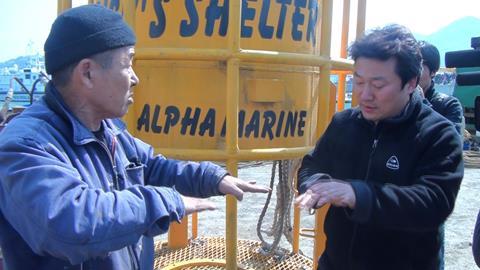 Premiering at the Busan International Film Festival to a significant amount of controversy, The Truth Shall Not Sink With Sewol is a courageous, informative and ultimately damning documentary that looks at how installing a diving bell following the tragic Sewol disaster in April met fierce opposition from the local coast guard, while also laying blame to the government’s overall response, as well as the local media coverage of the sinking and rescue operation.

The film also addresses issues surrounding the media coverage of the rescue operation and how things were misreported such as the number of vessels and divers involved in the search operation, which further fuels the film’s damning criticism of the overall response.

The delicate subject matter makes it difficult to determine how the film will do if released theatrically, but if the coverage surrounding the premiere at Busan is anything to go by, it’s bound to at least attract attention despite inevitable opposition to its release. On the international front, meanwhile, with so many aware of the tragedy that struck the shores of Jindo island located off Korea’s South Western coast on April 16 2014 that led to the deaths or disappearance of 304 people including many school children, it’s also set to stir much The Truth Shall Not Sink with Sewol coverage and subsequent festival invitations.

The film documents the difficulties faced by the president of the Alpha Diving Technology Lee Jong-in along with local reporter and co-director of the film Lee Sang-ho who was on the scene covering the rescue operation, and more specifically Lee’s failed attempt to install a diving bell at the disaster site that would allow divers to search for any survivors for a longer period of time. Costing approximately $150,000, Lee was essentially funding it himself, but with the local coast guard citing safety concerns, Lee was denied access and while they eventually were allowed to the site and began installing the diving bell, Lee continued to face an uphill battle that eventually ended in failure.

Like so many documentaries, there is always the danger of it becoming manipulative, but both Lee Sang-ho and documentary filmmaker Ahn Hae-ryong (My Mind Still There) have ensured they provide viewers with a comprehensive account of the circumstances surrounding the diving bell, and the rescue operation as a whole successfully backing up their arguments. Inevitably, however, emotions are running high, and the film is politically charged that some will naturally take issue with, but it’s this energy that drives the film.

The film’s success in addressing the relative points clearly, which to an international audience is especially necessary, is largely attributed to Lee Sang-ho who at certain points uses his journalistic experience to explain what’s happening, essentially taking on the narrator role, but he is also at the forefront in seeking answers questioning officials who largely remain unresponsive.

The film also addresses issues surrounding the media coverage of the rescue operation and how things were misreported such as the number of vessels and divers involved in the search operation, which further fuels the film’s damning criticism of the overall response.

Technically, while the film is well-edited, there is a sense that it has perhaps been put together rather hastily as seen with some of the film’s weak graphics and captions along with the fact that less than six months has passed since the sinking that this documentary was produced. Yet, this doesn’t take anything away from the documentary and arguably, makes the film all the more impressive and further illustrates the growing presence Korean documentaries are having on both the local and international stage such as A Dream of Iron and Non-Fiction Diary that both screened in Berlin.