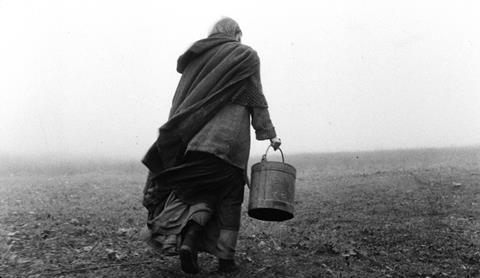 Viewers are used to expecting severity from Hungarian maestro Belá Tarr, but in The Turin Horse (A Torinoi Loi), he surpasses himself with a minimalistic drama that is stark even by the standards of his Satantango and Werckmeister Harmonies.

It’s a shame to think of this heroically uncompromising director shutting up shop, but if he does, The Turin Horse is a magnificent farewell.

A film for anyone who feels that Samuel Beckett is just too flippant in his view of the human condition, Tarr’s latest is about as bleak as cinema gets. But, in paring down his familiar long-take style to the barest bones, Tarr and regular collaborators Agnes Hranitzky, Laszló Krasznahorkai and Fred Kelemen have come up with a gauntly beautiful, stripped-down quintessence of the director’s style. A formidable event movie for the festival calendar, the film will be a challenging sell, depending on Tarr’s auteur status and devoted fan base to see it through.

Shot in a mere 30 long takes, The Turin Horse begins with a voice-over (Mihaly Raday) on black, explaining the back story: in Turin in 1899, thephilosopher Nietzsche witnessed a horse being whipped, and subsequently retreated into silence and madness. “We do not know what happened to the horse,” the voice tells us.

The body of the film depicts what we can assume to be the horse’s subsequent career - although this is a matter of conjecture. In chapters set over five days, the action - such as it is - takes place at a farmhouse in a brutally windblown landscape, where an elderly man, named at one point as Ohlsdorfer (Derszi) lives with his daughter (Bók) in bitterly austere conditions.

In the first extended shot, the horse pulls Ohlsdorfer’s car along a country road. Thereafter, the film follows the two human characters’ daily routine in great precision and with deliberate repetition: every day, they wake, the man dresses, his daughter walks to fetch water from the well, and eventually they sit down to a daily meager repast of boiled potatoes. Barely a word is said.

This gruelingly monotonous routine is interrupted by two events.  First, a neighbour (Kormos) arrives to buy some palinka (liquor) and delivers an extended rant about how the world is collapsing in an unstoppable circuit of degradation and acquisition. Second, a group of gypsies pass through, leaving the daughter a religious book which she later reads.

Meanwhile, existence on the farm is changing irrevocably. The horse refuses to pull its wagon, and then to eat - and that’s the start of the forces of entropy setting in. Finally, the film’s ostensible realism is replaced by a startling shift into a metaphysical, and indeed meta-filmic, key.

Viewers may emerge variously bored, puzzled, mesmerised or thrilled by the audacity of a film that dares to take cinema back to a bare-bones language reminiscent of the silent era. The film owes something to the genre of hard-times rural realism (eg. the Tavianis’ Padre Padrone) but distilled to a sparse, ritualistic drama that demands great precision from the cast, who are required to behave rather than act in the usual sense.

Visually extraordinary, shot by Kelemen in graduations of grey as much as in black and white, the film returns to the blasted plain landscapes ofSatantango, but also - like Michael Haneke’s The White Ribbon - echoing the early 20th-century images of German photographer August Sander.

Composer Mihaly Vig contributes an intermittent score, leaden with organ and abrasive violin, that alludes to folk music while also invoking therepetitions of minimalist composers such as Steve Reich. The omnipresent sound of a raging gale has a quasi-musical presence of its own.

As for the horse - which figures less than expected - it is mostly a solemn, impassive background presence, and a focus for the enigmatic drift of the film. Is the horse a repository, like Bresson’s donkey Baltasar, of human suffering? Or does it embody the universe’s absolute implacable indifference to humanity? The Nietzsche prologue, seemingly tangential to the main action, enigmatically bolsters the effect of parable.

Tarr has announced that this will be his last film, and indeed it’s hard to imagine where he could go from here. It’s a shame to think of this heroically uncompromising director shutting up shop, but if he does, The Turin Horse is a magnificent farewell - although the film ought perhaps to be accompanied by a warning for the depressive.