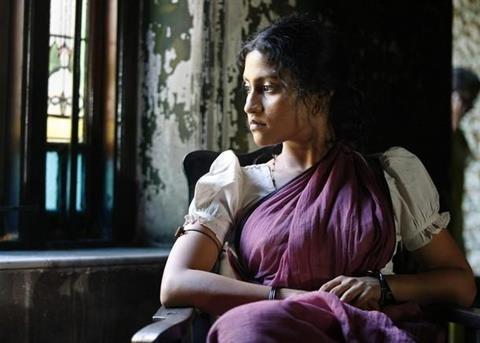 Aparna Sen directs and stars in The Unfinished Letter (Iti Mrinalini), reportedly  autobiographical, that tells the story of an aging actress hounded by the media and shabbily treated by the man in her life. One of Sen’s better movies since her successes, 36 Chowringhee Lane and The Japanese Wife, her wonderfully mounted work premiered at the Mumbai Film Festival.

Konkana Sen Sharma’s natural ease with which she conveys her character’s pain and turmoil.

Married with a couple of children, the relationship of Siddhartha Sarkar (Rajat Kapoor) with actress Mrinalini Mitra (Sen) traverses the usual path that many extra-marital affairs tend to do, and years later she contemplates suicide and begins to pen her last letter.

Konkana Sen Sharma, as the young Mitra, enjoys considerable screen time in a role that is emotionally more challenging than for Sen, who plays the older Mitra. Sharma’s natural ease with which she conveys her character’s pain and turmoil and Sen’s remarkably understated fortitude are some of the scoring points of the movie.

However, a sketchy story (credited to Sen and Ranjan Ghosh) and some miscasting may not exactly endear the film to the arthouse crowd. Koushik Sen as Chintan Nair seems terribly ill at ease essaying a man from Kerala, and the unconvincing physical resemblance between Sen and Sharma - despite them being mother and daughter off screen - does not help either. But Sen’s diehard fans may just about overlook these.

Aparna Sen, whose acting debut at age 16 in Satyajit Ray’s Three Daughters (Teen Kanya) eventually led to her first directorial venture, 36 Chowringhee Lane, though she still remains a fine on-screen performer. The literal translation of Iti Mrinalini is ‘Yours Mrinalini’.