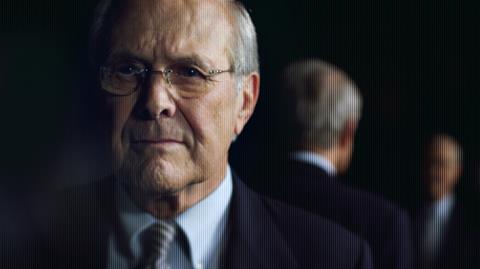 Oscar-winning documentary maker Errol Morris has referred to this feature-length profile of and interview with Donald Rumsfeld, one of the great survivors of US politics, as a “cat and mouse game”. The problem with the wily Rumsfeld is working out who’s the cat and who’s the mouse. For there’s no doubt that in his careful, rigorous, un-Mooreish way, Morris is keen to do the same thing with Rumsfeld that he did with Vietnam War strategist Robert McNamara in the fine The Fog Of War (2003): through patient, well-researched questioning, interspersed with archive footage, media reports and statistical data, to turn the screw on a man who carries a heavy responsibility for some of the United States’ most serious and bloody overseas military operations since the Second World War.

The upshot is a film that is at turns mesmerising and frustrating, as questioner and subject circle each other, tussle briefly and back off.

But if McNamara was feeling contrite right from the start, looking to Morris as a confessor who would help relieve him of a burden of guilt, the unrepentant, cocksure Rumsfeld is in no mood to be waterboarded, or even buttered up by a good-cop interrogator.

This said, The Unknown Known is fascinating not because of what Rumsfeld reveals, but for what the film reveals about him. What emerges from Morris’ careful chipping away at his man is not cathartic, as with McNamara, but chilling – the dizzying prospect that beneath Rumsfeld’s desire not to give anything away, there may actually be nothing to give away. It’s as if the exercise of power has emptied him out on the inside, and all that is left is the professional mask, the hollow phrases, and that famous, mocking rictus smile. If documentaries slotted into feature film genres, this one would be close to horror.

The upshot is a film that is at turns mesmerising and frustrating, as questioner and subject circle each other, tussle briefly and back off. Add to this slight sense of letdown the current audience weariness with Guantanamo (covered more incisively by Morris in Standard Operating Procedure) and Iraq, and this Radius-TWC release looks destined to garner more views on small screens at home (with The History Channel due to broadcast in the US) than large ones. However, with its big production values and lush soundtrack by Danny Elfman (here channelling Philip Glass), The Unknown Known certainly deserves to be seen in cinemas, and it could turn out to be as strong a performer abroad as on home ground.

The frame on which Morris’ enquiry hangs is a paper trail: the thousands of memos that Rumsfeld issued via Dictaphone during his two stints at the Pentagon, first from 1975 to 1977 under Gerald Ford, when he became the youngest ever US Defense Secretary, followed many years later (2001-2006) by his second term in the job under George W Bush. The film takes it title from Rumsfeld’s 2011 memoir Known and Unknown, which itself derives from a clever paradox about ‘known unknowns’ and ‘unknown knowns’ in politics that the Defense Secretary liked to pull out, especially when asked uncomfortable questions by journalists. Asked about the phrase later on by Morris, Rumsfeld ties himself in knots, revealing that he doesn’t actually know what it means.

This is one of his few uncontested round wins for the director in the documentary bout. Another is delivered by the film’s most compelling section, where Morris grills – or lightly sears – Rumsfeld on the treatment of prisoners in Guantanamo and the possibility that the unconventional interrogation techniques used there may have migrated to Iraq and Abu Ghraib. But even here, after a brief moment of discomfort, Rumsfeld deflects the criticism by agreeing that what happened in Abu Ghraib was shameful, and revealing that he offered his resignation to Bush over the matter not once, but twice (the scrawled resignation letter is duly produced).

Alongside the carefully-composed, sharply-lit interview footage of Rumsfeld (filmed frontally, with Morris appearing only as a voice-off), The Unknown Known fields graphs and telling archive footage that sometimes reminds us of the historical context and sometimes acts as an ironic counterpoint to the subject’s confident declarations.

It also plays entertainingly with the memos themselves, hiving words off or floating them across the screen to mirror, and mock, this eminence grise’s obsession with definitions and sybilline obfuscations like “The absence of evidence is not evidence of absence”. Sped-up night-and-day footage of Washington and jerky zooms in on satellite photos of Guantanamo and other key locations of the unfolding story keep the visual side of things as slick as Rumsfeld’s responses.