The Value Of Time 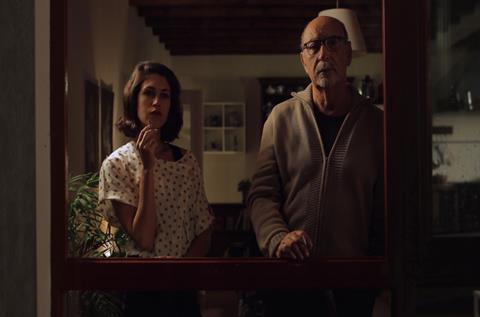 A wistful, melancholy reflection on life, death and eternal love, this story of a country doctor who had his wife cryogenically frozen and keeps her in his cellar, waiting for the moment when science will find a cure for the disease which took her away, is much less forbidding and far more gentle than it might seem at first glance.

Beautifully shot and performed with a complete lack of affectation, particularly by Ernesto Chao in the lead part, who resists any temptation to emote, restricting his acting only to fleeting expressions and the look in is eyes.

Keeping dialogue to a minimum but implying a lot through the sheer use of images, Xaver Bernudez’ film The Value Of Time (O Ouro do Tempo) requires plenty of patience from its audience, some may even complain that despite its title it ignores the value of time, but those who will stick with it to the end will be fully rewarded. The film premiered in competition at the Karlovy Vary Film Festival.

Alfredo (Ernesto Chao) is an old doctor who, if the hints provided by the script but never elaborated on are to be taken at face value, was a fiery revolutionary in his youth. Married to a luscious blonde Amalia (Marta Llarralde), with whom he had one son, Leandro, he lost all will to live once she passed untimely away at the age of 28.

In mourning since that time, he cut himself off the rest of the world, moved to a secluded country house, his only companion being a young woman, Corona (Nerea Barros), who officiates not only as his nurse - on the rare occasions when he receives patients - but is also his cook, all around maid and caretaker.

Having put his life on hold for an indefinite period of time to wait for the miracle that will bring his wife back, old Alfredo, now an octogenarian, respects a strict routine. Morning visits to the refrigerated coffin in the cellar to check the cryogenic system is in order, followed by calisthenics to keep the blood moving, regular meals, mostly from frozen food, watching television (mostly scientific programmes about resuscitating people who were given up for dead) playing chess on his laptop, or, since the first of the film’s three chapters takes place in winter, watching the snow fall.

At night he gets into bed and before going to sleep, watches again the old home movies featuring his beloved wife, wearing a light summer dress and bathing in the river. All his contacts with Corona, who takes care of all his needs, are laconic at best, the presence of the young woman, even when she crosses from her room to the bath in the buff, leaves him completely indifferent.

In summer, Corona is on holidays and his son, Leandro (Manuel Cortes) now working on his second marriage, comes to visit and attempts to revive his father’s lust for life but to no avail. All nature is vibrantly alive, so are the few people the camera encounters, such as a couple making love in the woods, but nothing melts Alfredo’s determination to live for the memory of his spouse, though first doubts are beginning to sneak into his subconscious.

In the third and last chapter, his own physical condition is gradually deteriorating. Corona is back, but soon develops flu that has him taking care of her, the human contact he had denied himself previously is established, the realisation that life has passed him by sinks in, but at this point there is nothing he can do about it.

Told subtly, quietly and always underplayed, this simple tale of a man who wasted life by insisting to live in a past that is long gone, and senselessly (as he son points out) hoping that it can be revived and relived, is a touching addition to the increasing number of films dedicated to the third age which have come out in recent years.

Beautifully shot and performed with a complete lack of affectation, particularly by Ernesto Chao in the lead part, who resists any temptation to emote, restricting his acting only to fleeting expressions and the look in is eyes. The film’s only deviation from the rigorous style it follows from beginning to end is the addition of a short epilogue which wears its sentimentality on its sleeve, something Bermudez had carefully managed to avoid beforehand.