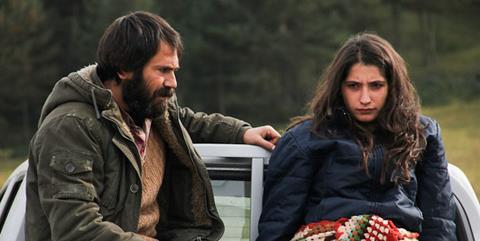 “Situation normal,” is the blanket walkie-talkie response from guards in several isolated forest watchtowers to their boss in this lovely gem of a small film that, without rush, earns its dramatic stripes once the leisurely set-up evolves into a rewarding burst of unleashed psychological and emotional energy.

Although prejudice against women, especially in rural Turkey, is never out of the director’s sights, she keeps it contained so that the personal tale is never overshadowed by more theoretical concerns.

The watchtower where the story is set will end up with anything but a normal situation. Esmer is in top form, mapping lonely troubled characters who work out their demons amidst luscious, fog-wrapped hills and tall verdant trees.

Nihat (Simsek) is a new hire, satisfied to be by himself in his tower after the automobile deaths of his wife and young son, for which he was responsible. Seher (Erdonmez) is a pretty young woman who has hurriedly left university to work nearby in a provincial bus station for an older relative, tending his café and serving as a tour hostess. Living in the facility’s dank basement, she trying to ride out an out-of-wedlock pregnancy for as long as possible.

Inevitably Nihat and Seher meet in the cafe. The back stories do not fit into a simple mould of masculine (phallic tower) and feminine (childbirth in a basement) but rather into a much more complex, carefully thought out encounter of two seemingly hapless souls who find salvation once the baby, which she abandons but he rescues and gets her to embrace, becomes a catalyst for positive action and for affection.

There is not a lot more to the narrative. Esmer in more interested in character observation and poignant mise-en-scene than gratuitous action. Nihat’s epiphany is quick: He rushes to save and take care of her child. Hers takes more time: She rejects the little boy, a product of incest, until her rage has dissipated (Erdonmez’s breakdown is a raw, magnificent performance.

Little by little anger turns into love. A sudden small kiss signals her change in attitude. Because Nihat is illegally hiding Seher in the tower, they are forced to put on a show of marriage. Once they share the responsibilities of caring for a newborn, Esmer seems to strongly suggest that they will build some kind of constructive, perhaps loving, relationship.

As original, well-made, and dramatically fulfilling as this Turkish-German-French coproduction is, chances for any substantial return outside of Turkey for The Watchtower (Gozetleme Kulesi) are limited. There is little market for such a Turkish-language product, especially a mostly slow-moving one. Festivals will be the primary exhibition venues.

Although prejudice against women, especially in rural Turkey, is never out of the director’s sights, she keeps it contained so that the personal tale is never overshadowed by more theoretical concerns. Esmer is less interested in broad strokes of social commentary than in the details of the couple’s journeys and the landscapes in which they operate. Her favoured strategy, an ultra-slight mini-zoom, is testament to the intimate scale in which she is most at home. It pays off.