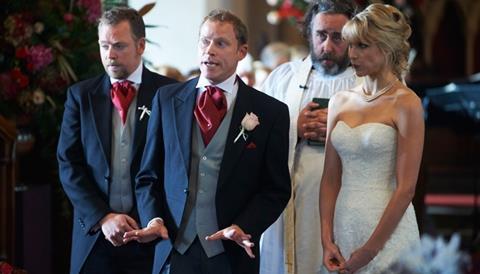 That old cinema staple, the ‘run up to the wedding’ genre, gets a brisk and amusing dust-off in this British comedy, which is blessed with a wonderful cast of seasoned campaigners as well as a screen newcomer (in the form of UK TV comedian Rufus Hound) and comes up with a film that hits the funny spots pretty well, despite drifting to a climax that is obvious though not quite convincing.

The strength of The Wedding Video lies in some of the hilarious comedy vignettes and more especially a trio of wonderful performances from three generations of actresses, Lucy Punch, Harriett Walter and Miriam Margolyes.

In the seasoned hands of director Nigel Cole (who made Saving Grace, Calendar Girls and Made In Dagenham) it is polished conjugal comedy, making good use of the plot device the all of the footage is supposedly shot fly-on-the-wall style by the best man in the run up to the wedding itself. It is an easy sale into English-language markets and those territories fond of British comedy.

To a certain extent the story of The Wedding Video is driven by a fairly familiar rom-com plot structure, but it is at its best well poking fun at the British society wedding…especially when that society is the moneyed and aspirational, and the perfect comedy target.

The film revolves around Raif (Hound), a genially oafish man who returns from travelling to attend the Cheshire wedding of his brother Tim (Robert Webb, star of much-loved UK TV comedy series Peep Show) to society girl Saskia (Lucy Punch, who is making an strong impact in the US in films such as Bad Teacher). Raif is bemused to remember that he knows Saskia from school where she was a legendary party animal and rebel.

Raif’s wedding gift is that he plans to video the run-up to the wedding as well as the happy event itself, while slightly disappointed that his once-bohemian brother is marrying into this socially aspirant family. Saskia’s mother Alex (a wonderful performance by Harriet Walter) is determined the wedding should top all others, while Saskia’s grandmother Patricia (Miriam Margolyes) is a terrifying snob.

The shambolic videoing leads to amusing coverage of such things as the crazy dance rehearsal; an embarrassing tour round a stately home chosen as the wedding party venue; a drunken wine-tasting session and (best of all) the hilarious stag-night that sees Tim spend much of the evening wallowing around in a giant inflatable penis. Also terrific is a cameo performance from Michelle (Green Wing) Gomez as a delightfully barking-mad wedding planner.

Given that big-screen newcomer Rufus Hound (who has an engaging smutty charm and a cheerful line delivery) is the lead here, it the climactic scenes come as no surprise, though when the film should be committed to delivering the comedy it veers into schmaltzy and vaguely sentimental territory. The strength of The Wedding Video lies in some of the hilarious comedy vignettes and more especially a trio of wonderful performances from three generations of actresses, Lucy Punch, Harriett Walter and Miriam Margolyes.