The Woman In A Septic Tank 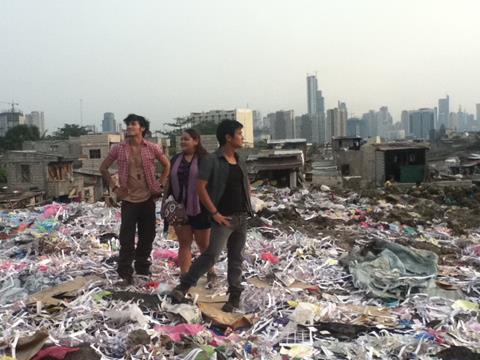 Philippine director Marlon Rivera’s freewheeling mockumentary about filmmaking and stars in his country is a engagingly oddball jaunt through the slums of Manila and the homes of mega-rich performers, and while at times scattershot in terms of the targets it hits, there is a lot of fun to be had along the way and especially in terms of the wonderful performance by comedienne Eugene Domingo.

Rivera and co-screenwriter Chris Martinez have concocted a low-budget film that pokes fun both at indie filmmaking sensibilities and pomposities of local stars.

The film, which screened in Busan and Tokyo film festivals and was the Philippines entry for the Oscars’ foreign language category, blends outlandish comedy with musical numbers and has a little drama on the side. Initially a little confusing, it finds it feet as the story draws on and ends on a real high – as the septic tank of the title comes into play.

Rivera and co-screenwriter Chris Martinez have concocted a low-budget film that pokes fun both at indie filmmaking sensibilities and pomposities of local stars. Released in late 2011, the film has been a big success in the Philippines, grossing 38.4 million pesos (about $906,000) and becoming the highest grossing Filipino independent film in the history.

The initial concept is that the film will follow the tough circumstance of impoverished mother Mila who funds herself forced to pimp her pre-teen daughter to an elderly Western pedophile. As they tour the slums and mull over casting, they envisage different variations of how the film might be shot, with the variations of footage poking fun at styles of Philippine cinema. The versions range from super-bleak melodrama through to a glossy camp musical.

They manage to arrange a meeting with legendary local actress Eugene Domingo (star of Kimi Dora and Here Comes the Bride and playing herself with a great deal of knowing fun) in her stylish home and who is enthusiastic about their low-budget dramatic ideals…though naturally also has more than a few thoughts on how she would play the role. She balks, however, about having to play a scene where she falls into a septic tank. The joke, however, is on her in a during-credits sequence where she and the tank finally come together