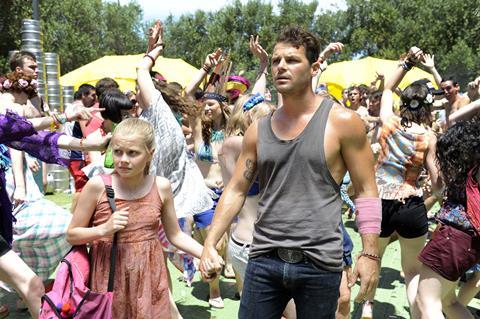 End of the world features keep on coming — it must be the zeitgeist — though this is the first to be set in Perth, at the southwestern corner of Australia. It’s not the obvious city to host the murderous mayhem and rampant immorality of Earth’s very last day as envisioned by director/writer Zac Hilditch, who fights hard to keep ever-encroaching silliness at bay. A standout performance from 12-year-old Angourie Rice grounds the bizarre events whenever she’s onscreen.

It’s young Angourie Rice who commands attention throughout. Convincing with hope, fear, need, terror and acceptance, the talented young actor faces the end of the world and the beginning of a glittering career with equanimity.

Striving courageously for that mighty demographic — young adults — so regularly out of the reach of local, underfunded moviemakers, there’s much to admire in Hilditch’s low-budget energy and inventiveness. With the right kind of promotional push, These Final Hours has the multiplex potential to match Tomorrow When The World Began in 2010, though the considerable sex and violence will limit the breadth of the audience.

What would YOU do, the movie asks, if absolutely everyone has but a few increasingly hot hours to live thanks to a meteor strike on the other side of the globe? Here Perth citizens desert their houses en masse or shoot their loved ones or join backyard bacchanalias.

We see these final hours via James (Nathan Phillips), a muscular everyman who, to add to his problems, learns that his mistress Zoe (Jessica de Gouw) is pregnant. Unable to deal with this news, he leaves her beachside home and drives through empty, rubbish-bag-strewn suburbs to attend “a party to end all parties”. On the way he rescues Rose (Angourie Rice) from the evil clutches of two rapacious heavies. Now finding himself the protector of this clear-eyed youngster who just wants to find her family, James takes her along with him, hijacking cars as they go.

The game actors must deal with extremes of human emotion without much help from the screenplay. Snook and Beck impress with unrestrained supporting performances, but it’s young Angourie Rice who commands attention throughout. Convincing with hope, fear, need, terror and acceptance, the talented young actor faces the end of the world and the beginning of a glittering career with equanimity. She has already completed  Walking With Dinosaurs 3D for Disney.

There’s plenty of talent involved. The cinematography of Bonnie Elliott is constantly inventive; editors Nick Meyers and Meredith Watson Jeffrey keep events racing towards an inevitable conclusion that features some awe-inspiring special effects as, on the beach, James and Zoe are engulfed by the ever-advancing tsunami of fire.