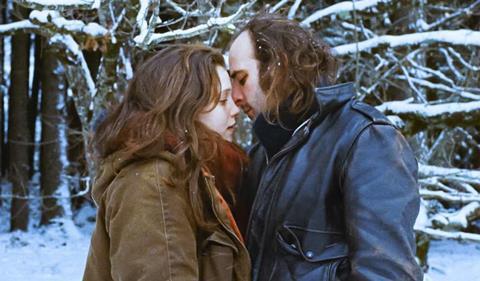 An innocent winter fling turns ugly in Guillaume Brac’s first full length feature film, named after the Burgundy town in which it takes place. Following the prestige success of his previous one-hour long effort A World Without Women, Brac teamed again for the script with Helene Ruault but this time for less felicitous results. Neither the characters nor the plot are sufficiently substantial to carry the film and the actors seem uncertain about their roles and what is expected of them.

Probably the one character best fleshed out in the entire film is that of Bernard Menez, a veteran French comic and singer, playing Maxime’s father.

Maxime (Vincent Macaigne, who played in Brac’s previous film) is a rock musician who visits his widowed father, Claude (Bernard Menez) to rest and write next songs in the parental home, away from the noise and bustle of Paris.

Interviewed for the local paper by Melodie (Solene Rigot) a young reporter, he has no trouble sweeping her off her feet and into his bed, away from her soccer-playing boyfriend with whom she evidently had broken up. For two or three days they romp in the snow, tumble in bed, dine with dad and his latest lady friend, and have a good time, but then she has to go away for three days.

When Melodie fails to show up at the train station on the right date and then disconnects her phone, Maxime feels first neglected, than slighted and finally betrayed, and enters a foul mood that degenerates into a row with his father. When he finally guesses the girl has gone back to her former lover, he steals the handgun of a friend and brutally kidnaps her.

Strangely enough, though Maxime is 33 and looks older and Melodie is 21 and seems much younger, she is the one to act mature and in control of her actions, and her personal insecurities make more sense than anything he does once she decides to stay away from him. If anything, he behaves not as a jilted lover who loses control over his actions, but rather like a spoiled brat who has been deprived of his favorite toy of the day.

The argument he has with his father, which erupts out of nowhere, would suggest past frictions between the two of them that were never hinted at before. As for Tonnerre itself, its main contribution consists of the frequent atmospheric shots but not much more. The one landscape that does stick in mind is a placid lake, wrapped in the various grey shades of winter, peaceful and cold, the set for the last scene Maxime and Melodie have together.

Probably the one character best fleshed out in the entire film is that of Bernard Menez, a veteran French comic and singer, playing Maxime’s father. His quiet and restrained but evident joie de vivre implied in his presence is the one thing his son can really envy. Their past history together is not quite clear and the son’s judgmental attitude certainly not justified enough, but then very little of whatever Vincent Macaigne does in this part seems to be so. As for Solene Rigot’s Melodie, she looks fresh and enticing, just right for the role she plays, and that includes her hesitations and doubts about herself and probably about her character as well.