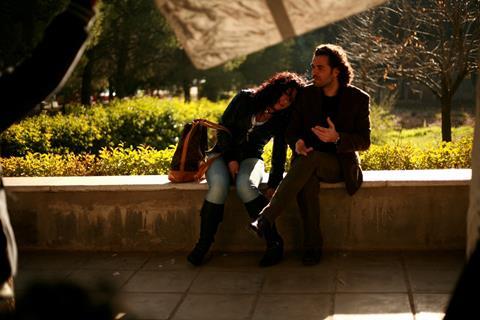 A fascinating glimpse into the life of a young woman who returns to her Jordanian home town after 14 years living overseas and struggles to pick up her former life. Mohammed Al Hushki’s Transit Cities (Mudon Al Tranzit) is elegantly shot, subtly dramatic and distinctive through its lead performance by the impressive Saba Moubarak.

It is a striking performance by Saba Moubarak as the determined Laila, who is at times bemused and saddened by the changes in her hometown.

Despite her flowing hair and Western attire, Laila (Moubarak) cuts a plaintive figure as she arrives back in Amman (the delicate soundtrack helps the mood) only to find her luggage lost at the airport. She heads home to her family, and while her sister Suha grudgingly offers to go shopping with her for new clothes, her father virtually ignores her, preferring to simply watch the news on television.

Laila secret – that she keeps from her family – is that she was married while she was living abroad in the US, and back in Amman she is trying to sort out her divorce and final financial settlement.

But she also finds Amman a changed place – the film’s main theme is how the twin prongs of fundamentalism and economic globalisation are impacting on the city – and she asks if she and her sister could visit the old house where they once lived she is told the area is ‘full of tourists and weird people’.

She is keen to teach, but finds that her old University wouldn’t accept her old qualifications, and when she goes to a local bank to sort her finances, the bank manager is mortified that she is wearing a short skirt and she is bluntly given a rug to cover up her bare legs.

She meets up again with Rabea (Mohamad Qabbani), an old friend from her University days and they flirt rather innocuously over coffee. But after she invites him to her new apartment for wine she is promptly thrown out the following day by her angry landlord. She hits him with an empty bottle of wine and eventually has to be bailed out of the police station by her father.

It is a striking performance by Saba Moubarak as the determined Laila, who is at times bemused and saddened by the changes in her hometown. Running a modest 71 minutes, Transit Cities - which had its world premiere at the Dubai International Film Festival - is extremely well made and very watchable, offering a fascinating look into a city rarely seen on screen.