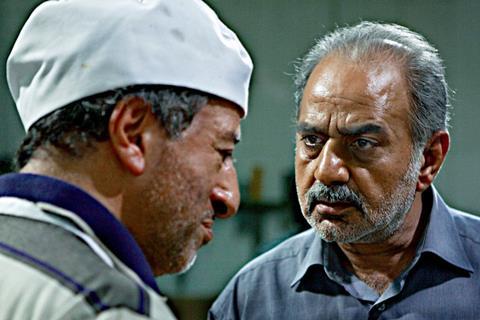 Yet another slice of bleak Iranian realism, Abdolreza Kahani’s black-and-white melodrama Twenty is aimed straight at the heartstrings. Styled to look like a documentary take on today’s Tehran, this depicts a miserable existence on the bottom rung of Iranian society, and Kahani is evidently courting sympathy from western audiences here.

Twenty’s special jury prize at Karlovy Vary indicates that he may have succeeded, but larger audiences seem unlikely to respond so enthusiastically, given that there is little in the cinematic language or the plot here to sustain their interest.

Twenty tells the story of Mr Soleimani (Parastui), a grim-faced lonely old man who pays minimum wages to, and demands maximum hours from, the put-upon staff at his banqueting hall which caters to both weddings and funerals. He shows no sympathy or understanding, despite their endless litany of woes – a one-armed cook, for example; a widowed waitress ostracized by society carrying her child around on her hip; and homeless staff members who sleep in trucks or buses before they come back in again the next morning.

As deprived and ill-treated as they are, however, the staff are still desperate when Mr Soleimani announces his intention to shut down in 20 days due to ill health, after which the site will be sold, razed to the ground and a condominium for the rich erected in its place.

In turn, they try to dissuade him, even suggesting a marriage to the widowed waitress. And, as the days tick by, Mr Soleimani starts to reveal that he has a heart after all.

Had the script been less insistent on piling so much misery on so few people, aside from the unnecessary manipulation of events and characters – such as the accordionist who claims to be Mr Soleimani’s son but is afraid to tell him – Twenty would have been far more effective. Simple, unadorned and natural performances by the entire cast are often spoiled by the unlikely circumstances enforced by a direction which stresses at all costs the dark side of life.