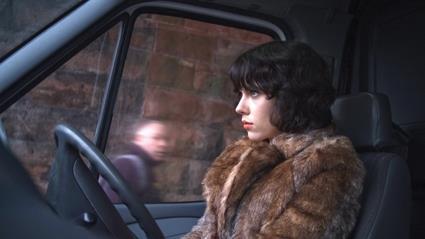 For much of Jonathan Glazer’s brave but often baffling follow-up to Birth (2004), intrigue trumps frustration as we attempt to puzzle out a backstory, or frontstory come to that, for Scarlett Johansson’s seductive, man-hunting sister from another planet. Based extremely loosely on the novel of the same name by Michel Faber, this is a mysterious, eerie, experience, whose resistance to easy interpretation (and freewheeling approach to source material) has something of Tarkovsky about it.

Perhaps the best thing about Glazer’s film is the way it slowly, chillingly unfolds the fact that the Johansson character has been programmed to be a human seduction machine, but has no human feelings.

The film also features one of the year’s best soundtracks – a disturbing, textured soundscape by young British ambient musician Mica Levi which is probably about as close to the sound of an alien iPod playlist as anyone’s going to get. Another pleasure is the way the Scottish setting itself becomes an alien planet, a familiar place made strange. Glasgow is a little like the Detroit of Jim Jarmusch’s recent vampire outing Only Lovers Left Alive: a scooped-out, washed-up city, ripe for fanged or alien predators.

In the end though, the one thing about the whole languorously dazzling exercise that is not particularly original is the plot, which, under its artsy skin, takes us on a frustratingly short journey from an alien’s alienation to ‘her’ first stirrings of understanding of what it is like to be human. But the letdown of the destination does not entirely erase the impact of the weird, memorable journey.

Without Johansson, whose understated but intense performance in semi-improv conditions (see below) cannot be faulted, Glazer’s film would probably be confined to the festival and cine-club circuit. Scarlett’s name on the poster should secure wider action, but this is still a niche number that will need some vigorous, targeted marketing and press coverage to succeed even in urban indie slots.

Part of that coverage will likely revolve around Glazer’s shooting technique for the ‘street’ parts of the film. Opening with semi-abstract footage that fuses docking space vessels with, perhaps, the laboratory creation of a human eye, then showing Johansson’s character apparently donning the clothes of a girl who is her doppelganger – presumably a human killed for the purpose – Under The Skin soon takes us onto the streets of Glasgow, where our unnamed protagonist, dressed up to seduce, drives around in a big white van stopping single men on the street and asking for directions.

These encounters – and others on the streets and in the shopping malls and clubs of Glasgow – were all filmed with hidden cameras, with Johansson (who does a passable take on a foxy London party girl’s accent) improvising dialogue according to her subject’s responses. The Candid Camera footage thus gathered will enhance the DVD, and could easily generate an art gallery show.

And you have to admit that whether or not we’re in on the trick, these edgy, couched seduction attempts have a real tension to them, enhanced by Levi’s scratchy soundtrack of squeals and booms. Soon enough, we’re shown the point of a successful entrapment: the men are lured to a run-down house that seems to act as a portal to a dark pool. Our sexy alien walks on the surface of this; her victims, following her siren form, sink, are swallowed up, and end up suspended in a constricting gel – for what purpose, we are never told.

Perhaps the best thing about Glazer’s film is the way it slowly, chillingly unfolds the fact that the Johanssen character has been programmed to be a human seduction machine, but has no human feelings. A scene on a windswept beach, where she is literally oblivious to a human tragedy unfolding, punches this message home. Much else remains unexplained – like the biker character (McWilliams), who roars around acting as a sort of clean-up man for his alien charge, but also – when she eventually goes AWOL – her pursuer. In a way, we don’t want to know – because this is a film in which explanations (like the final revelation of what’s under Johansson’s alien skin) are disappointments. CGI is no substitute for the power of the imagination.

Screenplay: Walter Campbell, Jonathan Glazer, based on the novel by Michel Faber