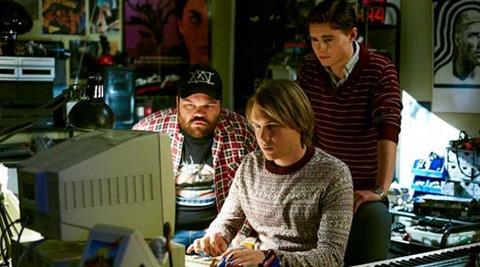 Evidently a made-for-TV production, Underground: The Julian Assange Story makes a workmanlike but watchable stab at Wikileaks founder Assange’s formative years on the run with his mother (Rachel Griffiths) in Australia. Zooming in on Assange’s teenage conviction for hacking, Connolly’s film is effective despite some obvious constraints and can look forward to healthy TV exposure via NBCUni and perhaps some festival sidebar action, helped of course by its subject’s never-ending notoriety.

Connolly’s cat-and-mouse construction forces the viewer to spend far too much time looking over actors’ necks as they jab away at their keyboards - of course it’s what Julian Assange does, but it’s a killer for momentum.

Assembled without too much in the way of visual flair - never has Melbourne looked quite so bland - Underground nonetheless puts on a plucky show with its period recreations of 1989. Newcomer Alex Williams, playing the 18-year-old Assange, also manages to field the right combination of bravado and blank self-absorption - the mise-en-scene probably helps, but he brings to mind a cocky young Richard Gere in American Graffiti.

Dramatically, though, Connolly’s decision to frame the film as a cops/hackers show comes at the expense of other, perhaps more interesting elements of Assange’s past, in particular his years on the run with his left-leaning mother and young half-brother from 70s cult The Family, which are dealt with perfunctorily. As police detective Ken Roberts of the technologically-challenged Australian Federal Police, Anthony LaPaglia also has little to do, although his tracksuit tops alone are worth the price of admission.

Underground focuses on the years between 1989 and 1991 when Assange and his two friends formed the International Subversives, attempting from their suburban bedrooms to infiltrate the world’s most powerful computer systems. Clunky dialogue abounds (“Julian could become anyone he wants to be!” declaims Griffiths), but there’s an effective insight here as to how Assange might have grown into the figure he is now, growing in determination as the sees, on his screen, the world moving towards Operation Desert Storm. Flailing around in his wake are Detective Roberts and his whizz-kid sidekick Jonah (Samuel).

Connolly’s cat-and-mouse construction forces the viewer to spend far too much time looking over actors’ necks as they jab away at their keyboards - of course it’s what Julian Assange does, but it’s a killer for momentum. The production gamely tries to overcome this obstacle by hitting the nostalgia button with nifty period equipment (Commodores, etc) and modem sounds not heard on screen for a long time. The Police operations room is a hoot.

Connolly (The Bank, Balibo) has also managed to fit in a sidebar involving Assange’s romance with Electra (Wheelwright) and eventual fatherhood which, again, is fascinating, and leads to a strong suspicion that this won’t be the last time we view attempts made on this man’s story onscreen. The film screened at the London Film Festival.

Screenplay: Robert Connolly, adapted from the book by Suelette Dreyfuss