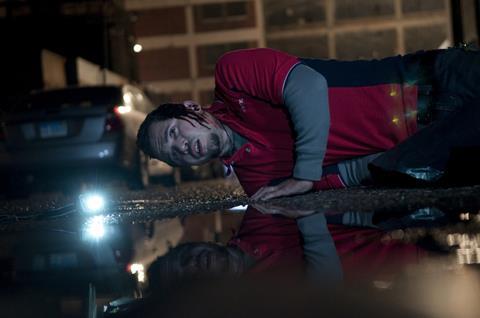 The adage “don’t be afraid of the dark” would provide little comfort to the few unfortunate souls who are among Earth’s last living humans in director Brad Anderson’s enjoyably unsettling thriller Vanishing On 7th Street. Re-imagining the apocalypse as an encroaching darkness that evaporates people in its path, this chamber piece bears a striking resemblance to George A. Romero’s original Night Of The Living Dead but prefers creeping unease to outright horror.

Vanishing On 7th Street is a subtler, more stimulating variation on the traditional horror/zombie/apocalypse film.

Making its world premiere at Toronto’s Midnight Madness section – where Anderson previously launched his Christian Bale psychological thriller The Machinist – Vanishing On 7th Street should easily find an audience among fans of apocalyptic thrillers, a genre that has been a staple of recent years, encompassing everything from I Am Legend to The Road. With a small cast that includes Hayden Christensen and Thandie Newton, Vanishing could be a moderate box-office performer for a filmmaker who tends toward niche indie fare.

As the film begins, a power outage has just hit Detroit. But when electricity is restored, it becomes apparent that a large majority of the population has vanished, their bodies eradicated and just their clothes remaining. Only a few random survivors remain: a TV reporter (Christensen), a physical therapist (Newton), a theatre projectionist (John Leguizamo) and a young kid (Jacob Latimore). They discover that the amount of daylight has rapidly decreased and that they must remain in lighted areas to avoid being devoured by hovering shadows (often in the form of human silhouettes). Even worse, the emergency generator they’re using to power their hideout (a local bar) is about to fail.

Combining the house-under-siege plot of Night Of The Living Dead with the threat of night predators from Richard Matheson’s novel I Am Legend (which was the inspiration for The Omega Man and the later Will Smith remake), Vanishing On 7th Street is agreeably modest in its ambitions, despite the fact that it’s dealing with the extermination of humanity. (In one of the film’s delicious unanswered mysteries, there is no explanation for why animals are unaffected.) Anderson, who has previously delved into psychological horror with The Machinist and Session 9, is more invested in the philosophical implications of this fictional plague than in trying to break new ground within its genre.

This is not to suggest that Anderson and Session 9 cinematographer Uta Briesewitz aren’t supremely skilled at executing several understated suspense sequences – just that Anderson is as concerned with the intellectual questions in Anthony Jaswinski’s screenplay as he with frightening his audience.

Taking its cue from Night Of The Living Dead, much of the movie revolves around the interactions of these dissimilar characters as they try to stay alive. This requires strongly drawn individuals in order to bolster audience empathy, and unfortunately the results are a bit uneven. Christensen gives perhaps his best performance since Shattered Glass, but still he seems too boyish to convince as the steely leader of this mismatched group. Leguizamo’s character exists largely to provide exposition and plot obstacles, but nonetheless the actor doesn’t bring much personality to the part. By contrast, Newton is quite touching as a woman pining for her lost (and presumably dead) child, and young actor Latimore holds his own with his adult co-stars.

Even if Vanishing On 7th Street is rarely overtly frightening, it is wonderfully spooky, its atmosphere enhanced immensely by a chilling soundtrack peppered with inaudible whispering from the hovering shadows of darkness descending upon the characters. Additionally, the cause of the lethal darkness – or why these select people escaped unharmed – is never explained, suggesting that Anderson sees this darkness as a metaphor for mortality, a way to ask how any of us would face the unfathomable prospect of our own death.

But while these questions are thought provoking, the B-movie characters don’t do much to illuminate these issues. Instead, Anderson’s themes resonate much more strongly in his strikingly staged set pieces when the characters leave the safety of the bar for supplies, only to discover that this hovering darkness has the ability to manipulate their emotions in order to lead them to their doom. Vanishing On 7th Street is a subtler, more stimulating variation on the traditional horror/zombie/apocalypse film, but it cuts deepest when it opts for good-old-fashioned elegant terror.