Waiting For The Sea 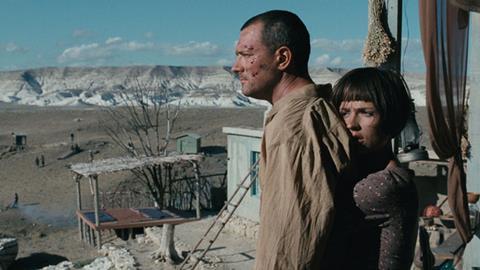 If sheer visual achievements were the only quality required to make a great film, Tajik director Bakhtiar Khudoijnazarov, whose film Waiting For The Sea opened this year’s Rome Film Festival, could easily claim the honors and very few would dare dispute it.

Khudoijnazarov’s basic idea, developed into a script by Sergej Ashkenazy, paints a vast, striking, portrait of human and natural decay, but next to the glorious images, the plot takes a secondary place.

Films, however, need more than stunning camera work, but in this case beyond the script’s attempt to suggest yet again that faith can move mountains - or, in this case, seas - there is such a chaotic agglomeration of themes pushing each other in and out of the frame that few viewers will make sense out of the twisted narrative and often unrelated events taking place in it.

By far the most ambitious project Khudoijnazarov has ever attempted, this metaphoric fairytale was inspired by an ecological disaster, the disappearance of the Aral Sea, a gigantic inland lake in Central Asia. It has been reduced to a third of its size in the course of a mere 30 years, leaving instead vast desert spaces covered by dust, sand and rubbish and changing not only the ecological balance of the place but also the nature of the people living there.

Khudoijnazarov, however, prefers to present it as a supernatural event taking place beyond time and place, in the midst of a wasteland which once used to be a fishing port and now is a ramshackle, dust-covered hovel in the desert.

Marat (Egor Beroev), once the proud captain of a fishing boat, had gone to sea ignoring the warnings of impending danger, sailed straight into a fearful cataclysm and lost his boat, his wife and all of his crew.

Miraculously he survived, and insists on coming back to his dilapidated hometown, which rests now on what once used to be the bottom of the sea.  Next to it, he finds his sunken boat, standing on the dry white earth.

Obsessed with the idea that if he can drag it back into the sea, he will retrieve everything he lost he single-handedly tries to budge the rusty hulk towards a direction that may, or may not, be the sea and will allow nothing - friends, relatives or the love of a woman who will do anything for him - to divert him from his purpose.

Khudoijnazarov’s basic idea, developed into a script by Sergej Ashkenazy, paints a vast, striking, portrait of human and natural decay, but next to the glorious images the plot takes a secondary place, with exalted actors striking poses rather than interpreting characters.

Crisscrossing the spectacular landscape, there are such motives as ancient versus modern; trains and camels rubbing against each other; shamans selling their magic; generational gaps and deteriorating morals, unrequited love and jealousy, plus the inclusion of a German character (played by actor-director Detlev Buck) adding a kind of international flavour.

Nothing of all this is really developed or delved into, the arbitrary cutting just throws all these ingredients into a thick, poetically melancholic broth spiced with folk aromas blowing in from Central Asia. Rich but not really fulfilling.