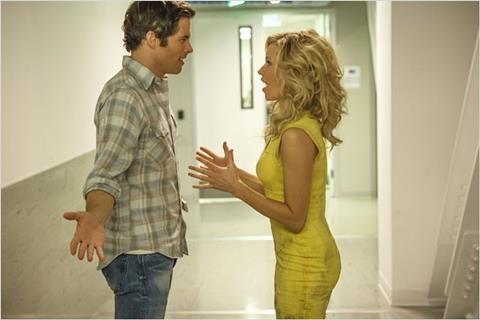 Though otherwise underpowered, broad comedy Walk Of Shame is just about carried by a fun lead performance from Elizabeth Banks as a TV news anchor having a very difficult day in the melting pot of downtown Los Angeles. Banks’ turn probably won’t drive much theatrical business but it might give this indie production enough appeal to attract a decent home audience.

It’s mostly Banks who keeps the film going with her display of lively character comedy and energetic slapstick.

Focus World is giving the R-rated farce a limited theatrical and simultaneous VOD launch in the US this weekend and the small screen release might be the one to produce the better return. Independent distributors that have acquired rights for other territories will probably get the best result s by adapting their release strategies to local conditions.

The unlikely plot has Meghan - after an uncharacteristic night of partying - stranded on the streets of downtown LA in a skimpy dress and without her car, phone or money. Her efforts to get home for a potentially career-making broadcast take Meghan through encounters with disbelieving cops, suspicious drug dealers and the congregation of a local synagogue before her new love interest (Anchorman 2’s James Marsden) and her two best friends (Gillian Jacobs from TV’s Community and Sarah Wright Olsen from 21 & Over) join forces for a rescue mission.

Writer-director Steven Brill (Mr Deeds, Without A Paddle) gets a few enjoyable sequences out of the unlikely culture clashes and a couple of the supporting performances produce funny moments. But it’s mostly Banks who keeps the film going with her display of lively character comedy and energetic slapstick.