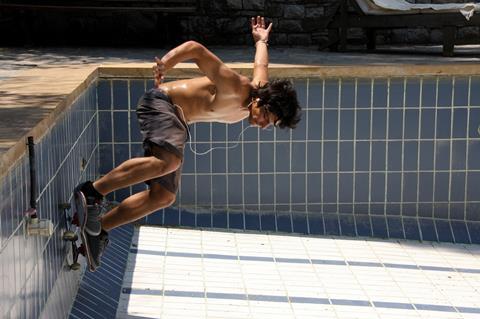 Greek film Wasted Youth is a energetic and exciting drama that is a breath of fresh Athenian air as it blends skateboard slackers with old-fashioned domestic drama and comes up with a fascinating portrait of ‘wasted youth’ of all ages in the modern-day Greek capital.

The film does recreate a vibrant sense of city going through difficult times.

The film, which world premiered at the Rotterdam International Film Festival as the opening night film, is a vibrant and at times dynamic film that could appeal to indie film buyers (and spark Greek film seasons at cinematheques and festivals) as well as slotting in nicely in any film festival roster.

The film opens impressively with a jerky, stylish, overhead shot of Athens over the opening credits, before opening with a virtually silent opening scene of a middle-aged man arriving home after a night shift and attempting to have perfunctory sex with his wife. This is Vasilis (Ieronimos Kaletsanos), who we later find out is a depressed policeman struggling with his lot in life.

The story then switches to follow slacker youth Harris (Harris Markou) – or Harry as the English subtitles describe him – who wakes in an opulent house and proceeds to skateboard in the house’s empty swimming pool. This, though, is the house owned by a friend of his mother – who is seriously ill in hospital – and Harris just sleeps there when he can’t stand being at home with his father.

As Harris swaggers around a hot and humid Athens hanging with his skater pals, partying, hanging with girls and looking for new spots to skate, Vasilis – who lives in a cramped and noisy city centre flat – is clearly undergoing a midlife crisis (he is thinking of opening a pizza delivery shop, but pulls out at the last minute) and is depressed about continually being put in night shift.

Harris makes up a series of stickers at the copy shop where a friend works. His stickers say ‘Wasted’, ‘Youth’ and ‘Malaka’ – meaning ‘wanker’ in Greek (perhaps the full title of ‘Wasted Wanker Youth’ would have been a step to far for the film), and sets about plastering them around the city.

Things take a dramatic turn when a drunken and upset Harris plasters a ‘Malaka’ sticker onto the rear window of Vasilis’ police car, leading to a confrontation between Vasilis and his police partner and a group of youths. Things end fatally as Vasilis’ partner responds to the aggravation and fires a deadly shot.

This lush and evocative film is impressively shot – often using hand-held cameras – by Argyris Papadimitropoulos and Jan Vogel, and while towards the end it does rather resort to old-fashioned script structure of seemingly disconnected stories coming together in a dramatic climax, it does recreate a vibrant sense of city going through difficult times.

It is oddly engaging to see that slacker youth are the same the world over, with Harris and his skateboarding friends simply plugging into their ipods to escape from the realities of life around them. In a similar fashion that these are the contemporary ‘wasted youth’, it is also clear that a depressed and unengaged  Vasilis is also the product of a ‘wasted youth’, finding himself in a dead-end job and an unhappy life at home.