Welcome To The Punch 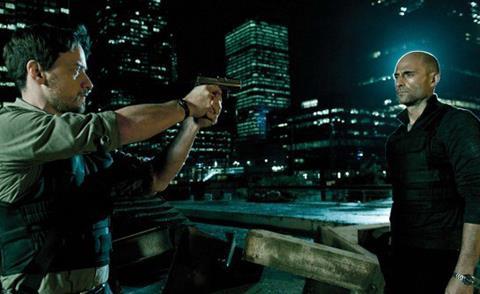 A British ‘bullet ballet’ in the best traditions of classic Hong Kong action films such as The Killer, Hard Boiled and Infernal Affairs, writer/director Eran Creevy’s film Welcome To The Punch is a delightfully freewheeling crime film that really delivers when it come to action mayhem and elegantly shot gunplay.

Set to open in the UK in mid-March, the film makes the most of a series of cool London locations – all made even more stylish thanks to slick and moody cinematography – and also offers leads Mark Strong and James McAvoy impressively morally complex roles to really get their teeth into. Welcome To The Punch is certainly unlike must British crime films, and has the mean-and-moody style to appeal internationally.

Eran Creevy made his name in the UK with his debut film, the urban drama Shifty, but his follow-up film is a distinct shift in direction that allows him to indulge his genre-geek sensibilities and also pay homage to directors like Michael Mann, the Scott Brothers (Scott Free is also one of the producers) and John Woo. The result is a smart blend of swirling crime action and moments of dark humour.

The film focuses on the relationship between detective Max Lewinsky (McAvoy) and ex-criminal Jacob Sternwood (Strong). As a young and ambitious cop Max had tried to take down Sternwood and his gang singlehanded – in an audaciously and stylishly shot opening sequence – but was injured in a fight, and had to watch Sternwood escape.

Years later, Sternwood’s son is badly injured in a heist gone wrong, forcing the reclusive criminal to return to London from his Icelandic hideaway. This gives Max another chance to try and capture the man who humiliated and physically scarred him. But as they start their very different investigations, the two mean find themselves on a collision course that will see than up against a common enemy and a deadly conspiracy and will see them have to deal with preconceptions as well as make tough decisions on who to trust.

The role of the tough, single-minded and highly intelligent Jacob Sternwood is perfect for the charismatic Mark Strong. His poise and mesmerising stillness (and thankfully not having to wear a wig) dovetail impressively with that character, and he convinces as a man who likes being in charge and will do whatever it takes to take revenge.

In some ways James McAvoy has the showier role – loose-canon, drug-taking, injured cop obsessed with his criminal rival – and he really throws himself into the physicality of the role, and while he impresses he can never really compete with Mark Strong’s controlled criminal.

The strong supporting cast includes the ever-excellent Peter Mullen as a criminal colleague of Sternwood; Andrea Riseborough as Max’s loyal cop colleague (a deliberately – though frustratingly – underwritten and limited role); Johnny Harris as an ex-Army thug in league with the bad guys and David Morrissey as a crusading police chief. Making a strong impact in a small role is Ruth Sheen as Harris’s vaguely dotty mum.

Cinematographer Ed Wild’s use of blue filters gives the London locations a sense of steely style and grace (great use is made of the Canary Wharf architecture) while production designer Crispian Sallis (who worked on films such as Hannibal and Gladiator for Ridley Scott) helps evoke a sense of gritty, burnished, style.

In a similar fashion to many of John Woo’s ‘heroic bloodshed’ Hong Kong action period, many of the gun battles are choreographed like deadly bullet dances, with blazing machine gun battles often resulting in very few injuries, and fight scenes shot for poise and grace as much as good old-fashioned violence. But then, that is the look that Creevy is going for, and he really does manage to deliver a pulse-pounding and beautiful looking British crime film.