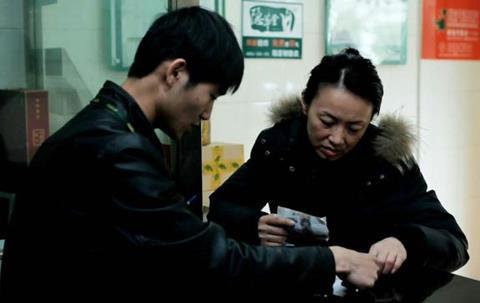 Yet another product from the Jeonju Digital Project, Ying Liang’s attempt to expose the fallacies of the Chinese system and shatter the benign image of the Chinese policemen, falls short of its intentions, simply by being too stylised, officious and self-righteous for its own good.

The film is a re-enactment of the mother’s tale, with actors taking up the parts of the real people.

Looking for all purposes as an experiment, it should be treated as such. Placing it in a prestigious international competition does it a disservice, by generating expectations it cannot really fulfill. The film premiered at the Locarno Film Festival.

The story of When Night Falls (Wo hai you hua yao shuo) is a shocking one to be sure. A young man riding an unlicensed bicycle is arrested by the police, beaten up and, when finally released demands justice. He is railroaded time and again until, out of sheer exasperation, he takes a knife, enters a police station in Shanghai and kills six cops before being apprehended.

When his mother is told her son is in trouble, she is sent to a mental hospital, kept out of circulation for the next 143 days, allowed to see her son only once during that period, and finally told that her son has been condemned to death for crimes that she had known nothing about until that moment.

That, at least, is the version provided for Ying Liang by the mother, Wang Jinmei (played on screen by An Nai), a version that is never contradicted - or confirmed for that matter - by any other source. Though, in all fairness, a documentary made by Ai Weiwei’s studio has already brought the case, which took place in 2008, to the attention of the Chinese internet audience.

The film is a re-enactment of the mother’s tale, with actors taking up the parts of the real people. The entire film is shot in long, fixed, static set-ups, mostly moody and dark, visually interesting but drawing attention away from the subject itself.

Given the fact that the abundant dialogue makes it ever more difficult for a Western audience to follow the finer points of the various arguments brought on screen, and one is entitled to wonder, for instance, whether the mother accuses the regime of “framing” her son, as the subtitles seem to indicate or is protesting that she could have helped his case and explain his acts, had she been given adequate time to prepare his defense.

Ying Liang, whose Taking Father Home was one of the more pleasant surprises in Rotterdam 2005, is certainly capable of much more.