You And The Night 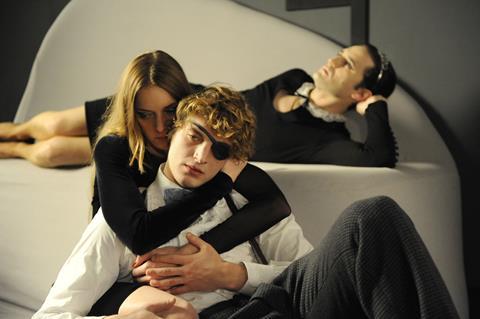 Veering between bizarrely amusing and beguilingly sensuous, Yann Gonzalez’s self-consciously surreal sexual-drama is a film of mixed pleasures with its camp silliness not quite managing to get the better of its rather leaden moments of pretention. An easy fit into LBGT festival programming, it is a tough sell into mainstream cinemas, though the sight of former football star Eric Cantona sporting a large prosthetic penis could help with publicity.

It is all a bit mannered and contrived, and filmed with no great sense of pace, logic or urgency, but there are moments to remain in the memory.

There is a whole lot of style involved as well as a lot of acting-by-posturing and making of statements (rather than delivering developed lines), and while there is much talking about sex, very little actually happens in terms of rampant sexuality. But in amidst all of the silliness, Gonzalez’s art house intensity gives the film a modest edge.

Inside their stark apartment, the trio await the arrival of their four guests - the Slut (Julie Bremond), the Teen (Alain Fabien Delon), the Stud (Eric Cantona) and the Star (Fabienne Babe). As each arrive there is much kissing and caressing before they get a chance to talk about their own backstories, allowing Gonzalez to indulge in a series of fantasy sequences that takes the film outside the sterile apartment.

It is all a bit mannered and contrived, and filmed with no great sense of pace, logic or urgency, but there are moments to remain in the memory…not least in the Stud’s memory scene that sees him stripped to his underwear by a whip-wielding police chief (a cameo from Beatrice Dalle). There is a sense that there is much potential in Gonzalez’s feature debut, but here he is just trying too hard when a little bit of artistic restraint could have ben useful.