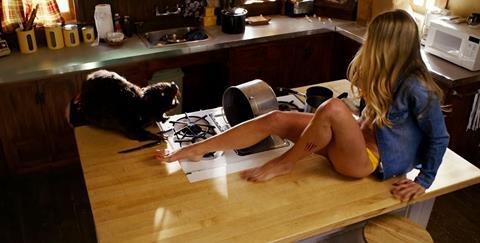 Talk about a title that says it all – a high concept guilty pleasure, Zombeavers is a B-movie that revels in its horror parody stylings, low-budget gore and shrill performances. It may well be something of a one-joke film, but is a great joke and one that gets nicely stretched out, though in admittedly familiar fashion.

The whole ‘cabin in the wood’s genre has been mined so often over the years, but at least there is a gleeful joy for the munching beasties in Zombeavers.

The debut film from comedy veteran Jordan Rubin, Zombeavers will be a nice addition to any genre festival and despite a no-name cast could well have the cult appeal to work for niche distributors and as a home entertainment title. Short and sharp - Zombeavers – which premiered at the Tribeca Film Festival – is a whole lot of horror fun.

The films opens on a stretch of Indiana road where a pair of dumb truck drivers plough into a cute deer, which dislodges a barrel of toxic waste that makes it way down a river and into the dam that is the home of some cute beavers. Meanwhile, three sorority sisters — feisty brunette Zoe (Courtney Palm), distraught blonde Jenn (Lexi Atkins) and sensible redhead Mary (Rachel Melvin) are heading for a girls’ weekend at Mary’s lakeside cabin to help Jenn get over the fact that  her boyfriend, Sam (Hutch Dano), was cheating on her.

Of course the boyfriends follow them there, but their planned sex-fuelled shenanigans are hampered by arrival of the not-so-cute zombeavers who attack the cabin (zombeaver in the bath tub) and by water (as the kids take a wee dip in the lake…a rookie error one would think, but you can never discount the lure of slipping into bathing costumes for young folk) as the zombeavers start munching and also turning some of the group into…well, human-zombeavers.

The whole ‘cabin in the wood’s genre has been mined so often over the years, but at least there is a gleeful joy for the munching beavers in the film. The film may lack a real budget or a cast who can make the most of the smart deadpan humour, but there is a whole lot of horror fun to be had here. Those doofus truck drivers return at the end of the film for a nicely judged – if rather obvious – twist, while there is also an end of credits tease for a sort-of sequel….Zombees (yes, a buzzing bee tastes a little zombeaver blood before heading back to the hive).