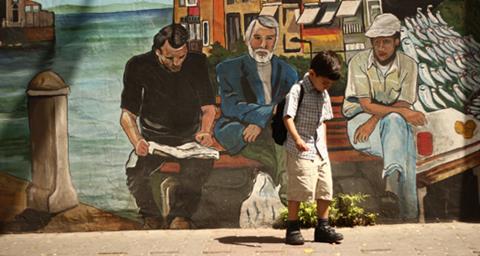 The one passing saving grace of this classic potboiler  - which screened at Sundance and will soon open the Turkish retrospective at the Lincoln Center - is the attempt to break down its narrative line in two parallel frames, separated by six years. Otherwise, there isn’t much to tell it apart from old-fashioned Turkish melodramas, whether it is themes such family honour, procreation, male pride or marital infidelity, the package put across in a blunt, obvious and crystal-clear fashion to prevent any eventual misunderstanding.

The acting all through is never more than one-dimensional and the Istanbul landscape has been much more effectively exploited before.

Rasit Celikezer’s film will no doubt benefit from the prestige of its early international exposure, but once the initial gloss wears of, Can will target mostly older audiences, at home or in the numerous Turkish communities abroad, who are not only familiar with but also fully accept the kind of morality lessons they are served here.

Ayse (Selen Ucer), a dish washer, and Cemal (Serdar Orcin), a metal worker, married but unable to have children despite all their efforts, finally resort to the help of the medical profession only to find out, to their great surprise, that Cemal is the one to blame. Tortured by the shadow it sheds on his manhood, Cemal convinces his unwilling wife to adopt. They acquire a baby illegally but once they bring it home, Ayse’s reticence to take care of it is painfully visible and one day Cemal, fed up with her conduct, leaves home for good.

Six years later, Ayse is still washing dishes, leaving Can (Yusuf Berkan Demirbag), now seven years-old, to sit on a public bench and wait for her all day long while she’s at work and disappointingly finds him waiting for her every evening at the same spot, to be taken home.

The miracle of his going away somehow into oblivion refuses to happen, and Ayse, wearing her constant scowl, bears her burden with the expression of a resigned victim.

What exactly happened in the course of the six years is never specified, what’s going on in winter when a little boy sitting on a bench in through rains and storms would certainly attract attention, and plenty of other questions remain unanswered. But after an uneasy incident (the boy follows her to work and gets her involved with an unpleasant colleague played by Erkan Avci), she goes to relatives and implores them to give her a contact with her departed hubby, who, in the meantime, has married again, this time the spoiled daughter of a rich car dealer who gets impregnated by one of her boyfriends.

By the end of this saga, all the guilty parties are duly punished, Ayse finally realises what a treasure she has been dealt in sweet, submissive, loving Can, and Can himself may finally go to school and gain an identity of his own.

Intercutting between the periods, once the viewer gets the general idea, does nothing except save the writers any need to explain the unexplainable, the acting all through is never more than one-dimensional and the Istanbul landscape has been much more effectively exploited before. All is as should be and the world is at peace with itself.