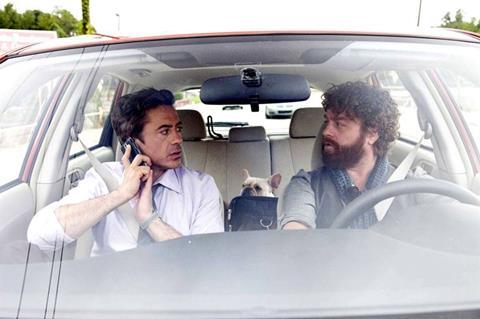 Todd Phillips, director of summer ‘09 smash The Hangover, delivers a slightly gentler kind of R-rated comedy in Due Date, an odd couple road trip yarn that teams Hangover co-star Zach Galifianakis with Robert Downey Jr. The laughs aren’t as big or frequent as they were in Phillips’s breakout hit, but with Downey on board this new outing should still do plenty of business at the box office.

The film also has a lot of subtler moments – some weirdly funny, some genuinely emotional, some quite edgy.

Warner – which, as on The Hangover and its currently shooting sequel, produced with Legendary – opens Due Date in the US and a number of international markets on the weekend of November 5. The studio should be able to lever Downey’s recent global success with Iron Man 2 and Sherlock Holmes (Galifianakis’ recent track record is more mixed) to produce equally big domestic and international takes.

The loosely structured script sets up the antagonism between Downey’s uptight father-to-be Peter and Galifianakis’ dopey wannabe actor Ethan by having the pair ejected from their Atlanta-to-Los Angeles flight and put on the anti-terrorist no-fly list. Desperate to get home for the birth of his first child, Peter reluctantly agrees to share a rental car with Ethan and his pampered French bulldog.

A handful of cameo performances add to the fun. Most notable are Juliette Lewis’ turn as a medical marijuana dispenser and Danny McBride’s scene as a mean tempered Western Union clerk.

But the film also has a lot of subtler moments – some weirdly funny, some genuinely emotional, some quite edgy – that rely on the stars’ nicely calibrated portrayals of the tightly wound, passive-aggressive Peter and the disaster prone but ever optimistic Ethan.