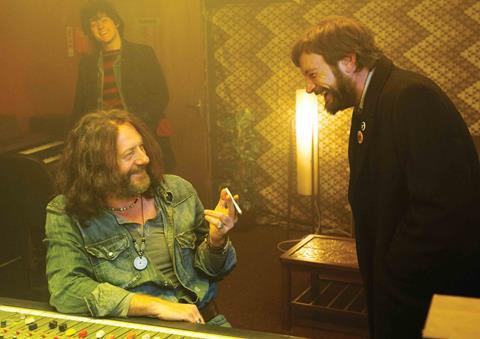 On the surface, Good Vibrations might appear to be a rather traditional bio-pic, but its fascinating real life-story of Terri Hooley, the one-eyed Godfather of Punk in Northern Ireland, also offers a powerful snapshot of the terrible times of Belfast in the 1970s, and a vision of how music can make a difference.

The strength of Good Vibrations is of how it portrays the importance of the scene within a city driven apart by violence.

The film opened the Belfast Film Festival, and most recently was the opening night film for the Karlovy Vary International Film Festival, and good word of mouth will boost sales interest for the film. The accents mean subtitling will be likely even in most English-speaking territories, while it is also likely the film will be a hot target for other film festivals.

Co-directors Lisa Barros D’Sa and Glenn Leyburn opt for a mixed bag of directorial styles (some of which work better than others) as they attempt to bring of dose of magical realism to the story of Hooley (played with real relish by Richard Dormer), a music-mad Belfast man who set up the Good Vibrations record store at the height of The Troubles in the 1970s – in the most-bombed half-mile in Europe – before setting up a record label when he became enraptured with the burgeoning Belfast punk scene.

For Hooley, the punk scene transcended the sectarianism that divided the city (the film plays up the horrors and drama of The Troubles, but it is never the main thrust of the story) as he set about setting up gigs for the young bands and even organising his own record label to try and spread the good word, always supporting bands such as Rudi and the Outcasts.

The centre point of the film – and also the real emotional high – comes as he agrees to produce a single of Teenage Kicks by The Undertones and manages to get it played on legendary Radio 1 DJ John Peel’s show. He famously played it twice in a row, and later said it was his favourite song.

But Hooley’s obsession with music, partying and drinking gets in the way of an ordered life, with his wife (played by Jodie Whittaker) taking their baby child and reluctantly leaving and his business falling on hard times. The climax of the film is a punk concert at the massive Ulster Hall (attended by John Peel) intended to raise money to try and support Good Vibrations – it is a massive success, but Hooley’s extensive guest list meant it was still a loss-maker.

The film is open and honest about Hooley and his life. Dormer plays him as an always smiling man with a passion and enthusiasm for the music, and while you never get much sense of him beyond his love of music (and love for his wife) he remains a dynamic and fascinating figure. Also providing fine support are comedian Dylan Moran as the manager of the Harp Bar, where many gigs are staged; Liam Cunningham as a long-haired record technician, and Kerr Logan (from TV’s Game Of Thrones) as Feargal Sharkey, lead singer of The Undertones.

Films about the punk rock scene – wherever the backdrop – tend to be of relative niche interest, but the strength of Good Vibrations is of how it portrays the importance of the scene within a city driven apart by violence and how the determination of one man to make a difference has such an impact and a legacy.