Gulf Stream Under The Iceberg 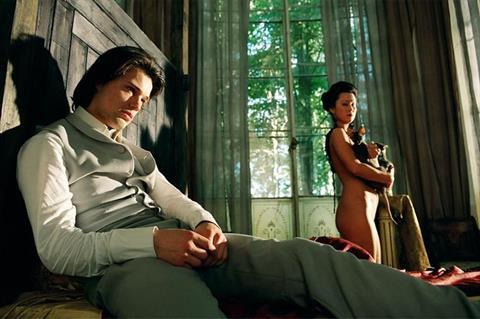 Strikingly bizarre and beautifully complex, Yevgeny Pashkevich’s film - which was Latvia’s foreign language Academy Award nomination – is high art-house material wilfully unlikely to find a mainstream audience but so mysteriously obscure that it could morph into a modest cult title.

While the storylines are vaguely ordered, the film itself favours overly dense and lush cinematography, striking costumes and opulent production design.

This elegantly presented triptych – Pashkevich states that the three stories all focus on the Biblical temptress Lilith (though named Leila and Lola in two of the stories) and a man obsessed with her, and were inspired by the writings of 19th century author Anatole France – is a slow-moving viewing challenge, but one that offers nuggets of arty interest in amidst the dense plotting.

The first of the stories is set in 1664 and follows a man who transports a painting and then meets a woman who may be the subject of the art work; the second takes place in 1883 in France and dwells on sexual obsession, while the final part is set in Riga in 1990.

While the storylines are vaguely ordered, the film itself favours overly dense and lush cinematography, striking costumes and opulent production design, which make for great backdrops to the sexual intertwining and certainly complement the painterly feel Yevgeny Pashkevich is aiming for. As a visual piece Gulf Stream Under The Iceberg has a certain amount to offer, though the storyline leaves something to be desired.