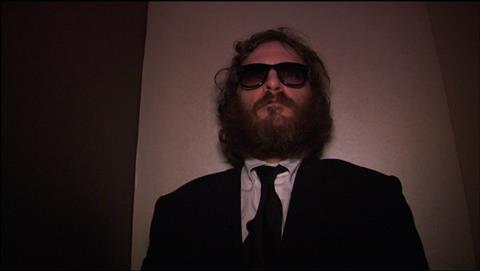 So, it was all a hoax after all. However much it tries to keep the tricksy, media-fuelled ambiguity alive, and whatever its maker claims, Casey Affleck’s ‘documentary’ about a ‘tumultuous year’ in the career of his brother-in-law Joaquin Phoenix – following the latter’s abrupt announcement in autumn 2008 that he was quitting acting and embarking on a career as a hip hop artiste – is too wryly tongue-in-cheek to cut the mustard as a sincere and intimate portrait of a tortured talent undergoing a creative crisis.

The tension set up by the question of whether this docu-biopic is real or fake can only carry the film so far.

The result is a film that is occasionally fascinating and sometimes quite funny, but more often too smugly and frustratingly pleased with its own mindgames. To do a Borat, I’m Still Here would need to come out of the ‘it’s all true’ closet; to be the “compassionate portrait” that Affleck was still insisting it was at the film’s post-premiere Venice presser, it would need to slam that closet door a lot more firmly than it does.

Along the way there are some hilarious moments – none more so than Phoenix’s mumblingly incoherent appearance on the David Letterman show, which many of this film’s potential viewers will already have seen on TV or via the Internet. But there are also long passages in which I’m Still Here struggles to say anything interesting, entertaining or relevant about acting, actors, lives at a crossroad, Hollywood lifestyles, creative meltdowns, or Joaquin Phoenix.

The tension set up by the question of whether this docu-biopic is real or fake can only carry the film so far; in the end, the main issue for public and buyers alike is put into words here by a TV newsclip in which a snarky presenter asks (a propos of the hoax rumours): “but most of all – do we care”?

Its audience will consist mostly of those who care, at least a little, about an actor who is not quite at the top of the A list, and/or those who are intrigued by Phoenix’s extended performance – still in progress at Venice, where he was (according to Affleck) present, but invisible to the media. So the challenge will be to pitch this to smart cineaste viewers with sensitive irony radars. Keeping the lid on the secret is essential of course – but it may not be enough to give this post-modern divertissement more than a niche outing when it is released on September 10 in the US (the few confirmed roll-outs elsewhere include the UK on September 17). Given the HD-shot, fly-on-the-wall look of long stretches of Affleck’s directorial debut, it may find much of its eventual public on smaller screens.

A short, sweetly-edited intro runs briskly through Phoenix’s career to date. Then we see the actor pacing restlessly, verbalising his malaise. “I don’t want to play the character of Joaquin anymore”, he complains to Casey’s handheld camera; “my output up to now has been fraudulent”. Soon he’s telling a TV reporter that his acting career is over; he intends to become a rapper instead. The problem is, Phoenix is a terrible rapper, his timing way off (“the tempo’s all wrong”, he complains to the DJ during one workout).

The tyro rapstar’s possible collaboration with Sean Combs, aka Puff Daddy, aka P.Diddy, is milked for its uneasy comic potential (or painful self-abasing bathos, if you’re in the ‘it’s all genuine’ camp), with Phoenix chasing Combs from New York to Miami but never quite managing to meet up – until he does, in two scenes that are among the most irony-rich in the film.

In another scene, Ben Stiller comes to visit to try to persuade Phoenix to take on a role in his film Greenberg. Both, we assume, must be in on the joke (guessing who was and wasn’t will keep the doubters busy).

Meanwhile, an increasingly bizarre-looking Phoenix - like a Blues Brother who’s run off to join Taliban – orders a pair of hookers online, does coke, sleeps through Barack Obama’s inauguration, and makes life difficult for the two assistants who share his life and villa.

There’s fragile, musical, northern-English Anthony  (played, the credits reveal, by actor Antony Langdon), who Phoenix accuses of being the mole who leaked the hoax rumours to that Entertainment Weekly reporter; and mild Larry (one of many roles credited as ‘himself’), a sort of all-purpose minder, companion and bag-carrier. There’s not as much full frontal male nudity as one news story based on a Cannes market screening suggested – but it’s true that, as anticipated, someone does defecate on the sleeping Joaquin.

Anyone still in any doubt about whether the film is in earnest might want to reflect on the fact that this is a documentary with a screenplay credit (to Affleck and Phoenix, natch). Or on the fact that ‘music and lyrics’ (in reality supplied by Phoenix) are credited to a certain ‘Marty Fogg’. There’s no such composer; but there is an astronomer called Marty or Martyn Fogg, whose main field of study is terraforming – changing the environment of inhospitable planets so that we can live on them. Like planet Phoenix, perhaps?

Production companies: They Are Going To Kill Us Productions, Magnolia Pictures