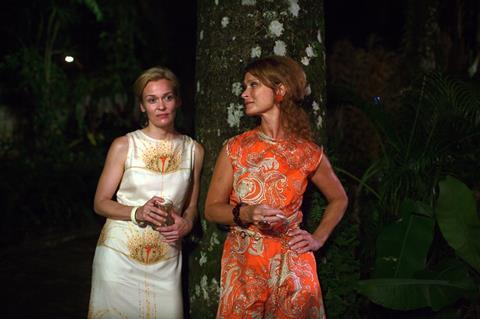 In Maria Sodahl’s slow paced melodrama, living in limbo means, for a Norwegian housewife, facing the easy life and marital infidelity in Trinidad, where she joins her engineer husband employed by an oil company. Her film may very well be measured, tasteful and well acted, but whether these qualities will work in its favour or not, is altogether rather doubtful, for fans of this genre are not usually the kind to appreciate so much restraint.

Well acted, particularly by Verndal and Endre, with clean and meticulous wide-screen camera work for the benefit of the Carribean landscape.

A respectable, well shot item, targeting mature audiences, Sodahl’s picture, which screened in competition at Thessaloniki, is bound to travel around to a few festivals before comfortably settling into life as on TV.

Sonia (Line Verndal) has stayed back home in Norway with her small son and daughter, taking care of her ailing mother, while her husband, Jo (Henrik Rafaelsen), an engineer working for an international conglomerate, is dispatched to supervise oil fields in Trinidad.

As soon as her mother is hospitalised, she packs up her children and follows the husband, who has been eagerly waiting for her. Once the joy of first encounter is over, Sonia gradually realises she is out of her depth away from home, having to live in a spacious but entirely anonymous house, with a maid who wouldn’t allow her to enter the kitchen or iron her dress.

In this new environment, the woman isn’t supposed to do such things, having to face long, endless days of doing nothing, sending her children to attend school in a language and a discipline which are not theirs, and worst of all, being told by her husband’s secretary that she should better return to Norway because Jo now belongs to her.

Unsurprisingly enough, Sonia can’t cope with these aggravations, piling up one on top of the other, and if each one may appear, in other people’s eyes, to be minor, she gradually falls to pieces and goes to a monastery to ponder on her next step and comes back convinced that this type of life is not for her.

To strengthen her argument, Sodahl’s script brings in Jo’s colleague at work, Daniel (Bryan Brown) and his Swedish wife, Charlotte (Lena Endre),  who have been living their entire lives on these kind of foreign assignments, and their fate finally turns into a cautionary lesson for Sonia and her family.

Though well acted, particularly by Verndal and Endre, with clean and meticulous wide-screen camera work for the benefit of the Carribean landscape, neither the direction nor the script provide sufficient intensity to keep audiences alert all through.

Told most of the time through Sonia’s p.o.v., it tends to lose the impact of personal experience every time the perspective wanders elsewhere. The decision to place the entire plot somewhere in the mid-seventies, with hints of the Third World national oil industries just about ready to kick out foreign advisers, wraps the whole story in a veil of irrelevance, suggesting this kind of easy-going colonial decadence was doomed, which is probably true but way past pointing out now.

Eventually it could be argued that legions of foreign diplomats everywhere are still leading the same kind of life today, but it would be hard to elicit - as this film tries - any sympathy in a general audience for the miseries of diplomatic life.