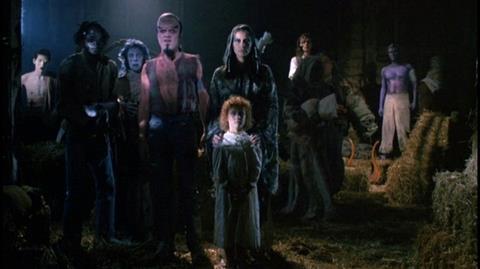 In the 1980s, Clive Barker emerged as a horror-fantasy multi-media talent, working in prose fiction, the theatre, comics, fine art and the movies.  Having founded a franchise with his low-budget directorial debut, Hellraiser (1987), Barker moved up a budgetary category for Nightbreed (1990), an adaptation of his novel Cabal.

This ghost of a film which might still be finished at least shows that leads Craig Sheffer and Anne Bobby, whose characterisations seemed thin in the release version, did a much better job than we were allowed to see.

An ambitious fantasy pitting the human forces of reaction against a race or sub-culture of bizarre yet beautiful monsters, Nightbreed was trimmed by the studio, Morgan Creek, from 126 to 102 minutes.  Film and book were both the first installments of projected parallel trilogies, but – thanks to the box office failure of the initial release version of Nightbreed – follow-ups have not appeared.

Since then, Barker has directed only one further film, Lord Of Illusions, though others have adapted his work into films like Candyman, Dread and The Midnight Meat Train.

Russell Cherrington and Mark Miller have dedicated themselves to retrieving Barker’s original vision from limbo.  The 153-minute cut shown at FrightFest in the UK and other genre events constitutes a work-in-progress, removing scenes shot at the studio’s insistence and replacing them with alternate or extended material from VHS workprints of Barker’s earlier rough cuts that have surfaced (one was found at the back of a shelf in the director’s office).

Image quality for the new or replacement material varies from poor to atrocious and it remains plainly an unfinished effort, with feeble on-set pops instead of foley gunshots and much recycling of Danny Elfman’s few score cues, plus a cluttered catch-all climax that includes shots from several versions and blurs rather than clarifies plot points.  Barker regular Doug Bradley has redubbed dialogue that was looped by another performer for the original release.

As a guide, Cherrington and Miller have relied on Barker’s novel rather than any of his script drafts and Nightbreed is now a more satisfying, complicated story – albeit one with pacing problems and a tone between fantasy and realism that remains uncertain.  Even in the studio cut, Nightbreed has proved surprisingly influential: the film’s human villain, murderous masked psychoanalyst Decker (David Cronenberg), seems to be the model for Cillian Murphy’s reading of Bat-villain the Scarecrow in Christopher Nolan’s Batman Begins and the subterranean monster-world of Barker’s Midian now looks like a forerunner in design and attitude of the haunted half-lands visited in Guillermo del Toro’s Hellboy films and Pan’s Labyrinth.

This ghost of a film which might still be finished at least shows that leads Craig Sheffer and Anne Bobby, whose characterisations seemed thin in the release version, did a much better job than we were allowed to see.  It’s possible that the single best element of this restoration is Bobby’s nightclub rendition of Johnny Get Angry, which gives the heroine an introduction she was denied in the studio cut and crucially grounds the whole fantastical effort in human feeling and a real world.

Fans may also prize a chance to see, at last, some of the background characters featured in Stephen Jones’s tie-in book, The Nightbreed Chronicles, but not the original movie and some moments of stop-motion animation (a leopard woman riding a dinosaur) that constitute the technique’s last hurrah before CGI swept it away.

Screenplay: Clive Barker, from his novel Cabal (drafts half used for Cabal Cut)