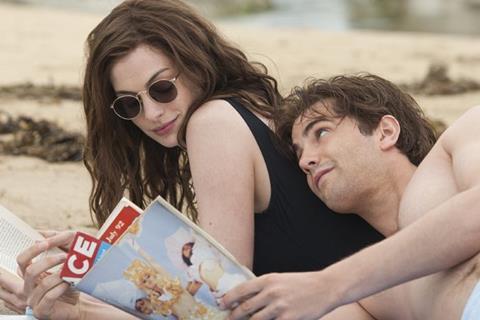 An impressively honest and moving adaptation of a much-loved – and oft-debated – novel, the film version of One Day has just the right blend of romance, humour and emotion to click with audiences looking for a little summer tearjerker action. Beautifully shot and smartly cast, it might lack special effects and a star-heavy cast, but good word-of-mouth and lack of a rival romantic-drama in marketplace could well help it become a slow-burning hot ticket.

The charm of the story is the depth of their friendship and how they help bring out the best in each other.

David Nicholls’ bestseller (the author also handled the film adaptation) has been a much-anticipated film, though in the UK certainly there has been intense debate on how Hollywood star Anne Hathaway would handle the accent and style playing an ambitious young working class woman from the North of England. It is a relief then, that her accent is a success and Hathaway is quite splendid in a complex role, dovetailing perfectly with Jim Sturgess, who plays the would-be love of her life.

The structure of the film – it tells the 20 year-relationship between Emma Morley (Hathaway) and Dexter Mayhew (Sturgess), but only shown as it happened on July 15 of each year – allows for subtle but profound character development and also plenty of opportunities to reflect the change in years through music, fashion and technology.

It is to Lone Scherfig’s credit, though, that restraint is the key word when it comes to presenting the transition of years…there is no emphasis on outlandish hairstyles or dodgy clothes, and no simplistic use of musical anthems. Instead we are movingly presented with the development of a friendship – veering through anger, tears, love and frustration – and all that it entails.

Their story together begins on July 15 1988 as they drunkenly be-friend each other on their graduation day at university in Edinburgh. They had clearly vaguely known each other before, but on this fateful day they drunkenly almost sleep together…and so begins a friendship that will last for decades.

Switch to July 15, 1989, and Emma is moving into a flat in London with ambitions of being a writer, and it is clear that the pair are now the best of friends, setting the tone where they talk or meet pretty much every subsequent July 15.

They naturally head off in different directions. With her writing going nowhere Em (as she is simply known) starts working in a dingy Mexican restaurant while the wealthy and socially at ease Dex meets his parents (played by Patricia Clarkson and Ken Stott) in Paris. He drifts into the media and becomes the host of a late-night ‘youth’ show while she plods along at the restaurant, allowing herself to be clumsily romance by would-be stand-up comedian Ian (an engaging performance by Rafe Spall).

Dex’s drug-taking, boozing and shallow lifestyle is detested by Emma and eventually causes a rift in their friendship, and when Emma settles down with Ian, Dexter – as his television career is brought to an end – marries and has a daughter with upper class Sylvia (Romola Garai).

But there is no doubt that the pair are destined for each other and as they become more mature and able to express themselves, so the right moment finally comes along. The charm of the story is not the ‘will-they-won’t they’, but rather the when and the where, and whether these two stubborn and complex individuals will allow true love to come their way.

The structure of only glimpsing at their lives on any given July 15 naturally presents some clever structuring – as well are giving the story a nigglingly forced arc – but this never gets in way of their absorbing story. There is real emotional drama as the film develops (as readers of the book will know and regular filmgoers will guess), but at the heart of One Day is the notion of love and friendship, and how wonderful and painful they can be.

Anne Hathaway slips easily into the belligerent and rather un-confident persona of Emma, with her characters Northern accent more clear in the scenes set in the late 1980s and early ‘90s, and appropriately softened (though still evident) as the years draw on.  Her Emma has just the right amount of ungainly beauty and warmth, and develops gently and elegantly into a sophisticated woman – it is a fine performance, and more than justifies the casting of a Hollywood actress into such a quintessentially English role.

Jim Sturgess is equally fine in the perhaps more layered role of Dexter, ably playing the rich kid who heads into a life of drugs and detox, but whose innate charm and passion gels perfectly with the more dependable Emma. The charm of the story is the depth of their friendship and how they help bring out the best in each other…and it is a moving story that could well entrance audiences.

Screenplay: David Nicholls, based on his novel One Day