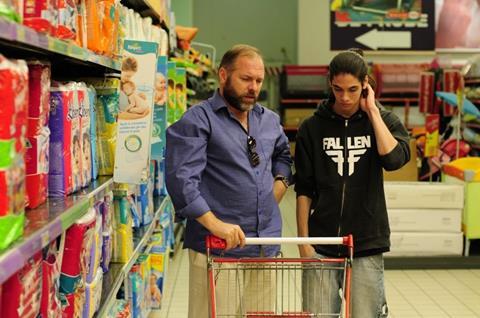 A quantum leap away from his epic nationalistic debut, Portrait of the Fighter as a Young Man, Constantin Popescu’s attempt to make a film about the unbearable banality of life, probably one of the more formidable challenges facing any filmmaker, displays the best possible intentions but actually comes to life only five minutes before it ends in an inconclusive manner.

Ivanov, who is certainly capable of much more, does not convey until it is too late either the charm, the wit or the threat that came through in his previous screen performances.

Despite the considerable efforts and talent of his lead actor, Vlad Ivanov, no doubt the most intriguing screen presence in Romanian cinema these days, Principles of Life (Principii de Viata) is plodding around for eighty odd minutes, going through one predictable situation after another, never attempting to develop its characters sufficiently for an audience to care for, until it resolves itself in a cathartic climax that may generate immediate satisfaction but could raise some serious educational questions later.

Relevant as another slice of middleclass life in Romania, the picture will probably survive only on the home front, thanks to some bits of explosive dialogue that do not quite work in translation.The film screened at the Transylvania International Film Festival.

The entire plot takes place in one day. Emil Velicanu (Ivanov), an upper middleclass executive is preparing to leave next day for a holiday at the seaside. But everything and everyone seems to plot against him.

The builders working on his new villa are behind schedule; a bickering customer is constantly complaining over the phone; his partner or boss (not quite clear which) expects him to show up at a party in the evening which he has all but forgotten about; his adolescent son from a previous marriage doesn’t feel at all like joining him, he’d rather go to fish with his mother’s new companion; his newborn baby is running a temperature and needs medication, and his second wife is less than enthusiastic about going all the way to the beach in Bulgaria when they could have gone to some closer

To top it all, some one left their car in Emil’s parking space. One frustration follows another, nothing formidable that the good-humored Velicanu cannot take in his stride, but it keeps piling up through the late hours of the afternoon until all hell breaks loose in the evening, when the older son, despite all of his father’s attempts to establish some kind of contact with him, simply goes back to his mother’s flat and refuses to come along for the family hike. Emil loses his temper and by the time he retrieves his son, the latest trace of sunny disposition is gone.

Conceived as a Vlad Ivanov showcase - indeed he is never off screen - the script, written by Razvan Radulescu (probably the most prolific screen writer in the country these days) and Alex Baciu, manages to cram in an inordinate number of lifelike occurrences, purposely unexceptional for that must have been the spirit of the film.

At which point, the director’s point of view should have provided the interest lacking in the action, but it doesn’t. And Ivanov, who is certainly capable of much more, does not convey until it is too late either the charm, the wit or the threat that came through in his previous screen performances. All the rest of the roles are far too minor to really count.