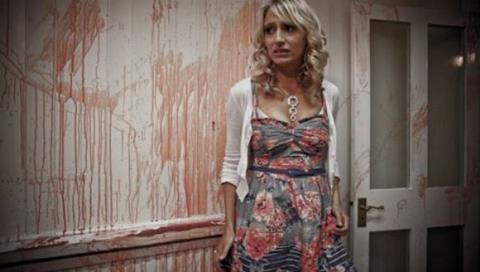 An amusingly smart and cheeky script is rather let down by low-budget special effects, but despite its budgetary shortcomings (and some over-enthusiastic performance), British genre flick Strippers vs Werewolves is an enjoyably silly affair that could well find an audience in the gore-hungry horror marketplace.

There are some amusing lines - ‘she had such great legs…have you found the other one…’ – and nice performances by some of the dancers.

To a certain extent it is a concept that has been done before – and tends to be more funnier on paper than actually on film – but while Strippers vs Werewolves struggles to find its right tone or story structure there are more than a few moments to enjoy. Often the set-ups and dialogue can be engaging, but when director Jonathan Glendening gets into the action the film tends to fall apart.

The opening scene provides an excuse to play Duran Duran’s Hungry Like A Wolf, and there is a werewolf howl as the $ilvadollaz club in Basildon explodes in 1984.

Fast forward to 2011 and in a nice cameo a werewolf at a pole dancing club (played by Martin Kemp, formerly of Duran Duran’s rival 1980’s new romantic band Spandau Ballet…and Eastenders) is stabbed in the eye with a silver fountain pen  - her dad gave it when got GSCE exams - by exotic dancer Justice (Adele Silva).

Her actions – she thought she was just fighting off an overly hairy punter – sets in motion a bloody feud between the strippers and a pack of London werewolves, headed by Billy Murray. Fore good measure there are also some vampires and other assorted demons thrown in for good measure.

There are some amusing lines - ‘she had such great legs…have you found the other one…’ – and nice performances by some of the dancers (especially Ali Bastian as Dani, who romances bouncer Franklyn by giving him a pair of knuckle dusters), but the film lets itself down by shoddy monster effects…as if it can never quite work out if it is playing it just for laughs or should be a real genre affair.

Cameos from Robert Englund, Steven Berkoff, Lysette Anthony and Sarah Douglas help a little, but never enough to help the film become little more than playful low-budget genre affair. In a bid to appeal to the fan crowd there is also a cameo from Bizarre magazine writer and horror fan Billy Chainsaw. It is also worth noting that there is never actually any stripping…just some mild exotic dancing.