The Land Of Hope 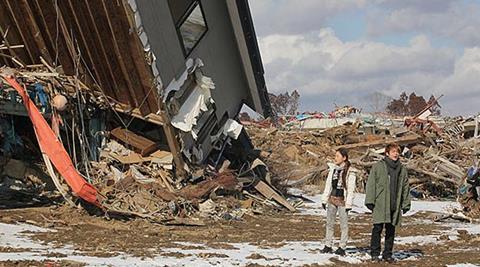 Japanese filmmaker Sion Sono takes a distinctly personal perspective of the aftermath of the Fukushima nuclear disaster in The Land Of Hope (Kibou no kuni), a slowly poignant and sober film that dwells on two rural families rather than trying to deal with the big picture.

Shot in clear, chilly and sombre tones and with atmospheric sound effects to fit the shots of an oddly beautiful snowy wasteland, the film is memorable and moving.

Perhaps too low-key and straightforward to attract high-profile art house distribution, Sono’s film has the right credentials for further festival appearances – it screened at the Toronto Film Festival – and could be an easy acquisition for broadcasters looking to deal with a pertinent and important subject.

The film follows the Ono and Suzuki families, neighbours who run dairy and produce farms on the outskirts of the small town of Oba in the fictional Nagashima (a clear blending of Hiroshima and Nagasaki) prefecture. The film opens with them going about their ordinary life, before one day there is a dull rumble and lights go out (no great special effect here) and they eventually hear on the radio that there has been an incident at the Nuclear plant, brought on by an earthquake.

With a 20-kilometer exclusion zone set around the devastated plant the family are separated by the authorities stretching out a yellow strip that demarcates the safe and dangerous area…all a matter of inches, but a seemingly arbitrary decision that splits the families and the community.

As the two families try and deal with the impact of the incident and look – as best they can – to the future. This allows both familiar scenes of Japanese family generational dynamics and also stark images of how life and location has been devastated by the disaster. Shot in clear, chilly and sombre tones and with atmospheric sound effects to fit the shots of an oddly beautiful snowy wasteland, the film is memorable and moving. What it lacks in pace and tension it makes up for in moving family drama and strong performances.