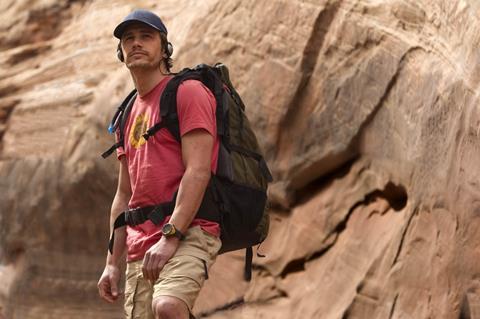 A fully immersive experience that’s equal parts gruelling and gripping, director Danny Boyle’s follow-up to his Oscar-winning Slumdog Millionaire may be too harrowing for some viewers, but the adventurous will be treated to a film that builds to a beautifully calibrated emotional climax. Based on the true story of mountain climber Aron Ralston, who in 2003 got trapped in a remote canyon and was forced to cut off his arm to escape, 127 Hours features James Franco in a performance that’s largely a solo act as his character fights to stay alive (and sane) while partly pinned underneath a boulder.

Because of the film’s immediacy and intensity, 127 Hours can feel a bit like an adrenaline rush.

Fox Searchlight, which has a longstanding relationship with Boyle, will release 127 Hours in limited release November 5. In terms of the film’s commercial prospects, it’s important to remember that before Slumdog’s unlikely box-office success, Boyle was hardly a blockbuster filmmaker, specializing in unconventional or highly idiosyncratic stories. His new film is no different in that regard, and its subject matter may be a mixed blessing for those familiar with the actual events – some might be intrigued to see how Boyle adapts the claustrophobic, grisly tale, while others might not want to put themselves through such an ordeal. Another commercial wild card is Franco, who has some marquee value but has yet to open a picture on his own.

Aron (Franco) heads out into the Utah countryside to commune with nature, his greatest pleasure. He briefly encounters two backpackers (Amber Tamblyn and Kate Mara), but other than that he is blissfully alone – which proves potentially deadly when he falls into a crevice, his arm trapped under an immovable rock. Trying to remain calm, Aron plots a way to free himself before he dies of dehydration.

As with his recent films, Boyle chooses for 127 Hours a hyper-stylized, nearly hallucinatory approach, which at first seems vaguely off-putting for a story that is so elemental. But as the narrative settles into its central scenario – Aron trapped under a boulder – the strategy proves to have its merits as Boyle uses flashbacks, fantasy sequences, extreme close-ups and Aron’s direct addresses to a portable video camera as methods to break up the monotony of the one-setting tale.

Because of the film’s immediacy and intensity, 127 Hours can feel a bit like an adrenaline rush, aided by Boyle’s choice to incorporate exaggerated sound and visual effects that are meant to coincide with Aron’s degenerating mental condition as he grows weaker and more panicked. The downside to this manic style, unfortunately, is that it can prove exhausting. But whenever 127 Hours threatens to become too visually frantic, Franco’s highly believable performance helps ground the proceedings. Part of the drama of 127 Hours stems from the fact that Aron was no extraordinary individual before this ordeal – a horrible accident like this could have happened to anyone – and so Franco makes Aron a likeably regular free spirit who is about to discover that his endless quest for solitude can’t fully erase his need for friends and loved ones.

Because 127 Hours is largely a showcase for Franco, the film’s other actors understandably are mere bit players. Not surprisingly then, some (such as Clemence Poesy as Aron’s frustrated love interest) come across as little more than emotional props, although Tamblyn and Mara are effective as fun-loving hikers smitten by Aron’s casually carnal appeal.

Assumedly, most moviegoers will already be aware of the facts of Aron’s story, a knowledge that adds a deeper level of tension for the viewer awaiting the crucial moments that lead to his decision to cut off part of his arm. Suffice it to say that Boyle pulls no punches in a bravura sequence that convincingly builds to Aron’s brutal self-mutilation. From there, Boyle and his Slumdog co-writer Simon Beaufoy (working from Ralston’s own book) create a denouement that reaches a powerful epiphany by beautifully tracing back to the beginning of the film in an unexpected but affecting way. On one level, 127 Hours is peddling a trite moral – no man is an island – but Boyle, editor Jon Harris, and cinematographers Anthony Dod Mantle and Enrique Chediak superbly make that platitude resonant viscerally rather than simply intellectually.

Screenplay: Danny Boyle, Simon Beaufoy, based on the book Between A Rock And A Hard Place by Aron Ralston