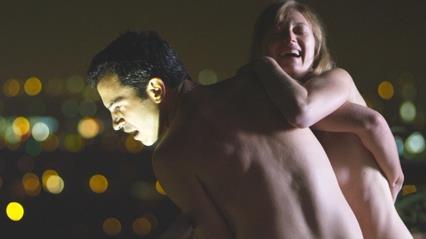 The romantic and emotional complications involved in sustaining a years-long affair gets sensitive, intelligent examination in 28 Hotel Rooms, a deceptively simple but endlessly intriguing drama. Propelled by the chemistry of leads Chris Messina and Marin Ireland, the feature debut of writer-director Matt Ross has a fetching hook, offering a look into the ups and downs of an adulterous couple entirely through their 28 encounters in different hotels. But what could easily have been a gimmick turns out to be a smart, incisive way to illustrate how every love affair eventually comes with strings attached.

28 Hotel Rooms is incredibly moving in its depiction of the challenges of making love last.

Playing in Sundance’s NEXT section, 28 Hotel Rooms boasts a marketable, seemingly salacious hook, which will help compensate for the fact that the movie has no recognisable stars. While the film features some sexual content, there isn’t as much as its premise might suggest, which may disappoint some, but good reviews (especially for the performances) should nonetheless tempt indie viewers.

As its title indicates, the film consists of a series of sequences – each in a different hotel room – between an unnamed New York writer (Messina) and a Seattle accountant (Ireland) over the span of several years. When they have their first fling, she’s married, but as they continue to meet up for secret sexual trysts, he gets involved with a serious girlfriend as well. These outside individuals are never shown, however: 28 Hotel Rooms consists of just the man and woman as the naughty novelty of their affair transforms into a more loving, mature relationship – even as the demands of their real lives begin to impinge on them.

Some may object to the film’s claustrophobic conceit in which we learn almost nothing about these two people except from what they tell each other. But Ross’s approach yields huge dividends in that it creates suspense within the audience, making us voyeurs into their relationship while still withholding critical information about the characters.

In this way, 28 Hotel Rooms has almost a lab-experiment feel to it, showing the evolution of an affair in which lust gives way to need, vulnerability and genuine love – but only in the context of the hotel rooms where they can meet up. (The film implies that these are the only instances these characters have been in the same room together, their only other communication being done through texting or calling.)

Messina and Ireland are terrific playing people who only slowly start to reveal their true natures. In films like Vicky Cristina Barcelona and Julie & Julia, Messina has mostly been relegated to being the nice-guy boyfriend, so it’s a treat to see him show a full range of emotions here, whether it’s highflying confidence when his literary career takes off or crushing despair when he starts to realize that this affair can’t last.

Equally affecting, Ireland plays a woman who has no qualms about cheating on her husband but yet can’t bring herself to divorce him. That’s a tricky ethical dichotomy – especially considering that her husband is never shown – but Ireland makes it work, illustrating both the woman’s excitement for her secret tryst but also her deeply conflicted feelings because of her love for her husband.

If a bit of repetitiveness sets in on occasion, it’s only because 28 Hotel Rooms feels quite realistic in portraying the ebb and flow of an affair initially based around excitement and freedom. Inevitably, the movie’s characters will try to end the relationship when deeper emotions start to surface, only to realize that they can’t let go of one another. Moral watchdogs won’t be pleased with Ross’ non-judgmental treatment toward his characters’ illicit affair, but 28 Hotel Rooms is nonetheless incredibly moving in its depiction of the challenges of making love last – even if it’s a love that’s a betrayal of others.