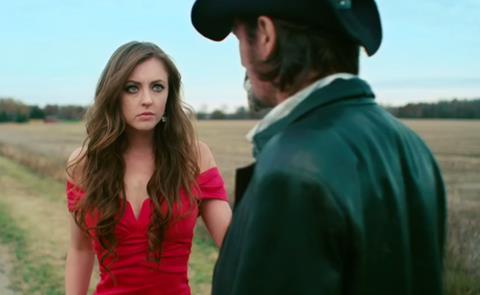 The title 88 refers to a motel room number, but also indicates the infinite loop of its complex story structure – which, as in Christopher Nolan’s Memento, is dictated by the specific type of amnesia suffered by its protagonist.

A probable cult item for those following Isabelle’s unusual career and fans of femme-led exploitation cinema.

It opens with a close shot of the blank face of actress Katherine Isabelle, caught in a fugue moment, and pulls back to reveal that she’s in a diner and happens momentarily to have forgotten her entire life, though she’s recently had her little finger shot off.  Clues to her situation spill out of her dropped bag, which contains a lot of gumballs and an automatic weapon.

After semi-accidentally wounding a waitress, she runs outside and is dragged into a car by Ty (co-writer Tim Doiron, giving himself the lion’s share of smart lines), who has slightly more idea what’s going on.  The plot advances in several threads as the amnesiac’s life comes back to her, though she has at least two distinct personalities – the timid, moral, hapless Gwen and the brazen, violent, determined Flamingo.

She is on the run from club owner Cyrus (Christopher Lloyd), whom she blames for the violent death of her boyfriend Aster (Kyle Schmid). Though the villain is oddly protective of the avenger who is out to get him, and the inciting incident of Gwen/Flamingo’s rampage turns out to be complicated enough to fracture her personality and saddle her with a set of personality-change triggers which include those gumballs and glasses of milk.

Isabelle, impressive in the Ginger Snaps series and American Mary, has a showcase role as the multiple-personality lead.  At once heroine and villainess, she holds together a narrative that keeps threatening to become completely incoherent (whether or not Gwen has her hand-wound is a useful signpost when mentally trying to reassemble the scenes into chronological order).

There’s a severe case of the Tarantinos about the world the film takes place in, with regular shoot-outs leaving piles of bodies all around and eccentric crooks/cops mostly awed by the presence of the killer lady, and Lloyd works hard on making a grotesque crime boss into a conflicted character. Veteran Michael Ironside plays his umpteenth lawman role, and is in the unenviable position of having to sit down and try to get Gwen’s story straight.

Director/co-writer April Mullen, who also plays one of the lowlifes who abound, gets very good work from Isabelle.  The film is wayward and confusing in the mid-section, when supporting character Ty gets beefed up with his own plotline then written out summarily, but a climactic revelation makes sense of it all and adds emotional depth to the this-is-where-we-came-in fade-out.

A probable cult item for those following Isabelle’s unusual career and fans of femme-led exploitation cinema, this had its world premiere at the FrightFest strand of the Glasgow Film Festival but will probably find the bulk of its audience via non-theatrical channels.