Encouraged by the potential of the Indian market, US studios are becoming more involved in local-language production. Liz Shackleton explores the realities of producing in India and profiles the current players 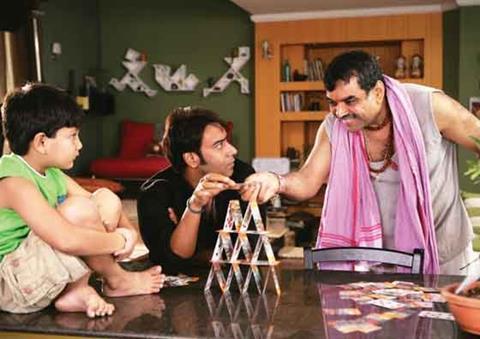 When faced with the overwhelming popularity of local films in India, the US studios have long known that one of the best strategies for building business in the market is to become involved in local-language production.

Almost all the studios have tested the market by acquiring or co-producing Indian-language films for distribution in India and overseas. As they are already active in India as broadcasters, and in most cases also have local film distribution offices, they already have existing infrastructure from which to build.

But taking Bollywood on at its own game is not so easy, and there have been some high-profile disappointments, especially when the studios attempted large-scale international releases. Warner Bros’ Chandni Chowk To China grossed only $13.4m worldwide in early 2009, including a US take of less than $1m. In 2007, Sony’s Saawariya did slightly better with $18.5m from India and overseas, but went up against Om Shanti Om starring Shah Rukh Khan, which was the clear winner with around $40m. Disney’s animation Roadside Romeo, a co-production with Yash Raj Films released in 2008, only grossed around $1.5m in India.

There are many reasons why these films underperformed. In the case of Roadside Romeo, animation is a genre that is yet to take hold in India. The competition from live-action pictures around big holidays such as Diwali is fierce and the studios have found that putting Indian product through their usual -dist-ribution channels is not always that effective.

“The strategy is co-productions where we don’t fund at an inflated acquistion price, but rather cashflow the cost of production”

In addition, the pressure on the US studios in this star-driven industry is much the same as it is for the local corporates. Bollywood only has a handful of stars who can guarantee box office — some of whom finance and produce their own pictures. The competition to acquire product with the biggest names, coupled with optimistic market projections, has driven up prices, making it difficult to recoup even with a hit.

Sony and Warner Bros were early entrants to this game and were only testing the waters without investing large amounts of money or setting up a dedicated production team. Coming in after them, Fox had the advantage of learning from their mistakes and consequently jumped in with both feet.

Rather than making one-off investments through its existing distribution team, Fox formed a joint venture with sister company Star, which is the biggest buyer of Indian films and a leading broadcaster in India. Headed by former Star executive Vijay Singh, Fox Star Studios benefits from an established infrastructure and insider knowledge — Star has been in the Indian market so long that it is regarded by Bollywood as a local player. The company’s first wide release, Karan Johar’s My Name Is Khan starring Shah Rukh Khan, grossed $43m worldwide including $22m in India. Fox Star fully financed and took worldwide rights to the film, and while the local rumour mill went into overdrive, it is understood that it was profitable.

Meanwhile, the film’s overseas distribution established a new paradigm. Rather than simply push the film through Fox’s existing set-up, the release combined Fox Searchlight’s specialist expertise in the US, where it grossed an impressive $4m, with a more traditional diaspora distribution pattern in the US and other markets. In addition, Fox Star sales chief Rohit Sharma sold some smaller territories to third-party distributors which specialise in Indian films.

Fox Star’s strategy is focused on the Indian and diaspora markets, rather than trying to get Bollywood films to cross over to non-Indian audiences. “We’ll always do our best to get to any crossover we can, however foreign-language films crossing over is a challenging game and therefore our business model relies on recouping out of the territory,” says Fox International Productions (FIP) president Sanford Panitch.

Fox Star recently wrapped action thriller Dum Maro Dum, which it is co-producing with director Rohan Sippy, and is prepping three other projects.

“The ongoing strategy is co-productions where we don’t fund at an inflated acquisition price, but rather cashflow the cost of production,” says Panitch.

Walt Disney is another studio making headway in India, though it has -different priorities and has taken a different route to Fox. After a failed joint venture with the KK Modi Group -dating back to 1993, Disney re-entered the Indian market in 2004, and since then has been slowly building its TV channels, movie production and consumer products.

“Our investment in UTV has significantly enhanced our presence in India”

In 2008, Disney got a leg-up by acquiring a majority stake in UTV Software Communications, from which it had previously acquired the Hungama children’s channel, giving it a valuable local partner.

“The investment has significantly advanced our presence and [given us] a strategic relationship with the country’s leading integrated media company,” says Mahesh Samat, managing director, Walt Disney Company India.

UTV continues to act as an independent publicly listed company — the idea being that the local and foreign studio complement one another.

“It works well to pursue that independent strategy where the company moves on its own but we can collaborate where we need to,” explains Ronnie Screwvala, chairman and chief executive of UTV. “That could be on co-producing movies together, film distribution or even franchising because that’s a model that doesn’t really exist in India and something that Disney is good at.”

As part of its global local-language strategy, Disney also develops its own Indian projects independently of UTV. It is releasing its first live-action Hindi feature, Do Dooni Char, on October 8 and is in production on the Telugu-language Once Upon A Warrior.

Meanwhile, Warner and Sony have by no means given up on Indian production. “Warner Bros will always be interested in looking at projects in Hindi and other Indian languages,” says country manager Blaise Fernandes. Warner recently scored a hit with comedy Atithi Tum Kab Jaoge?, which grossed a respectable $8.5m in March, while Sony has co-produced We Are Family, a remake of Stepmom with UTV and Dharma Productions, which UTV is releasing on September 3.

More recently, US studio-in-waiting Relativity Media and international TV giant Endemol have joined the fray. Relativity is assembling a team for a Mumbai-based production, financing and distribution entity in partnership with investor Keyur Patel of Fuse Capital. The company is expected to produce local-language content, as well as handle distribution of Relativity’s English-language pictures in India.

So far the local industry appears to welcome this foreign invasion. For the producers it means more players to sell to, and the local studios say it could help them expand their market overseas. Bollywood still has the edge in distributing mainstream product to the diaspora but India is diversifying its output and the smaller, edgier titles which do not appeal to diaspora audiences could perhaps benefit from Western expertise.

Indeed, India has a long history of absorbing other cultures and making them part of its own distinctive mix, rather than being overwhelmed by them. It is more than likely this will happen with Hollywood too.

US studios in India

Launched in 2008, Fox Star first distributed Shashank Ghosh’s quirky Quick Gun Murugun followed by My Name Is Khan, which was its first international release. Next up is Rohan Sippy’s Dum Maro Dum, a Goa-set action thriller starring Abhishek Bachchan which is scheduled for a February 2011 release. The studio is also developing projects with director Vipul Shah and Tamil film-maker AR Murugadoss.

Sony’s involvement with Indian production dates back to 2002 when it was involved in the global distribution of Lagaan, initially through its sister broadcaster Sony Entertainment Television (SET). Since Saawariya, the studio has distributed Hindi titles including cricket drama Meerabai Not Out and Straight, which it co-produced with iDream. More recently it co-produced a remake of Stepmom, entitled We Are Family, with Karan Johar’s Dharma Productions and UTV.

Animation Roadside Romeo, a co-production with Yash Raj Films, was a flop, but the studio is about to release its first live-action Hindi film, Do Dooni Char, It is also working on two promising live-action pictures — superhero action adventure Zokkomon, starring child actor Darsheel Safary (Taare Zameen Par), and the Telugu-language fantasy adventure Once Upon a Warrior.