A Night In Old Mexico 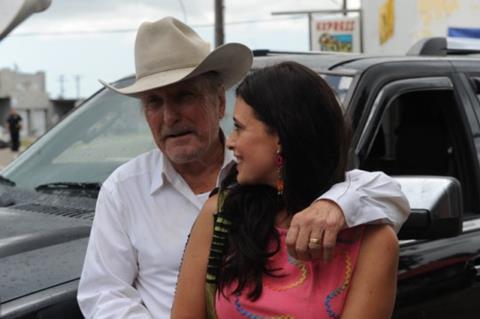 Watching a spirited Robert Duvall hoot and holler against the dying of the light is the chief pleasure of A Night In Old Mexico (Una noche en el viejo Mexico) , a soft-centred labour of love for the actor and his Lonesome Dove screenwriter William D. Wittliff. It is something Duvall does with practised ease but constructing a juicy star vehicle for him seems to have taken precedence over the creation of a plot that is anything more than functional and formulaic.

Whether crooning Mexicali Rose, dancing a merry jig in a brothel, squaring up for some fisticuffs in a bar or briefly lingering on the regrets of the past, the irrepressible Duvall leaves everyone else in the shade.

Duvall fans will want to savour his appearance, but are more likely to do so on home entertainment, which will make theatrical possibilities on the slim side.

Duvall is admirably full of beans  and gamely committed to his role of  Red Bovie, an old-school Texas rancher who has been forced to surrender his property to the bank. “Every damned thing I ever cared about is gone, ” he laments before planning to put a bullet in his skull.

That’s when his city slicker grandson Gally (Jeremy Irvine) arrives from New York dressed to the nines in garish cowboy gear and keen to bond with the grandpa he has never previously met. That’s the only sign Red needs to put his suicide on hold, rev up his trusty Cadillac and drag Gally on a road trip to Mexico in search of “some singing, some dancing” and some female company. There is clearly life in the old dog yet.

A Night In Old Mexico barely scratches the surface of the dramatic possibilities in the unexpected alliance of naive youngster and feisty old coot . The fractured family history is trite and Gally is a sketchily developed character meaning that there never feels anything much at stake emotionally.

More problematic is the way Wittliff interweaves the tale of a drug deal gone wrong and a cold-hearted man of mystery on the trail of the missing $150,000 that has come into the possession of Red. It is very much like Cormac McCarthy lite - ‘No Country For Grumpy Old Men’ maybe, with the great Luis Tosar wasted in a thin supporting role as the killer Panama.

Cinematographer David Omedes makes an effective contribution with colourful moments on the Mexican streets during the day of the dead and a few striking scenes in the desert. Ultimately, there is no doubt who the star attraction is here. Whether crooning Mexicali Rose, dancing a merry jig in a brothel, squaring up for some fisticuffs in a bar or briefly lingering on the regrets of the past, the irrepressible Duvall leaves everyone else in the shade.